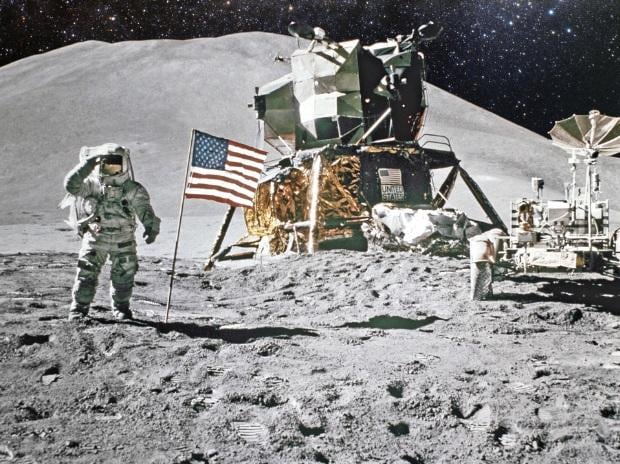 50 years of Apollo 11: how geological maps made the moon landings interesting

I still remember a drawing in a newspaper in July 1969, just before Apollo’s first moon landing. It showed the ground crew reminding the astronauts as they boarded their rocket, “Don’t forget to bring rock!” It was a nod to an old holiday cliché – people who went to the seaside were often asked to bring back “rock”, a reference to rock candy. It was not very funny, but it shows that once the race against the Soviets was won, it was a question of discovering the geology of the Moon.

The scientific value of the moon landing would have been diminished without studies to establish the context of the moon landing sites. The main consideration was to land in a safe location, but the rocks collected there would have conveyed much less information if no effort had been made to determine the nature and, more importantly, the relationships between the rock units. from which the samples were collected.

This was done by making detailed geological maps, using the same principles that geologists use on Earth.

Telescopic observers had already started drawing general maps of the visible face of the moon (which is all that can be seen of the Earth) in the 1600s. They were mainly mapping exercises, documenting what the moon looks like. Soon names were tagged to label individual characteristics, but it was just a convenient way to identify them. It was not based on any real understanding.

On the other hand, geologists make maps to better understand the history of a region. They distinguish areas of land whose ages – and therefore possibly the origin and composition – can be deduced as being different. This is usually achieved by calculating what’s on top of what (the younger layers will usually be on top of the older layers) and transverse relationships (younger entities can intersect older ones, but not the other way around. ).

The first published attempt to use these principles on the moon was a 1960 study by geologists Robert J. Hackman and Arnold C. Mason. It was based entirely on telescopic observations and showed the dark spots – the “maria” – grouped together as all of the same age in yellow, covering a “pre-maria” terrain, considered older, in brown. The youngest unit was called “post-maria rocks”, shown in green, which was interpreted as craters and ejecta from these that formed after maria.

With only three age categories, this map was very basic, and was soon replaced by more detailed studies. In 1961, geologist Gene Shoemaker circulated a prototype geological map of the area around the Copernicus Crater.

Shoemaker divided the materials he could see on the surface into five age classes and subdivided some of them based on texture – like “smooth” versus “hummocky.” He also offered interpretations for each of his units, such as “probably mostly crushed rock” and “probably volcanic flows”. He even included cross sections showing what structures may lie below the surface at a depth of several miles.

Shoemaker collaborated with two colleagues to publish a considerably more detailed map of the same region in 1967. It was based on photographic images obtained by ground telescopes, supplemented by visual observations made using the Lowell refractor telescope of 24 inches in Flagstaff, Arizona, to check out the fine details. The first author of this map was HH Schmitt, more commonly known as Jack Schmitt, who, as the Apollo 17 lunar module pilot in 1972, became the first – and to date, the only – professionally qualified geologist to walk on the moon.

Subsequent lunar maps began to use images obtained by spacecraft orbiting the moon in front of Apollo 11. Maps were made of all proposed moon landing sites for Apollo, including some that were never visited. At first, these relied heavily on photographs taken by the five unmanned lunar satellites of Lunar Orbiter. Later, Apollo landing sites were mapped using photos taken during previous Apollo missions.

Although moon walkers discovered that some of the geology mapped from orbit had been misinterpreted, each unit turned out to be truly worth investigating, so the time spent in the surface was better spent than blundering at random. For example, the Cayley Plains where Apollo 16 landed were considered volcanic, but turned out to be an equally interesting unit made up of welded pieces of older rock fragmented by impacts.

Geological mapping continues today, even on bodies where there is no prospect of human visitors in the foreseeable future. The United States Geological Survey, which published the Apollo maps, has since published maps of at least parts of all other rocky planets and several smaller rocky or icy bodies. In Europe, an effort is underway to prepare the first detailed geological maps of all of Mercury in preparation for the arrival in 2025 of BepiColombo in orbit around the planet.

Some of these maps are being released by the European Commission project Planmap, which is also preparing immersive 3D virtual environments of potential Moon and Mars landing sites for astronaut training.

Ultimately, we have to thank the Apollo missions for much of our geological knowledge on the moon. The geological maps and rock samples they allowed astronauts to bring back to Earth have provided us with invaluable insight into the history of the Moon, although some of the transportation has yet to be investigated, 50 years more late.

This article is republished from The Conversation under a Creative Commons license. Read the original article.