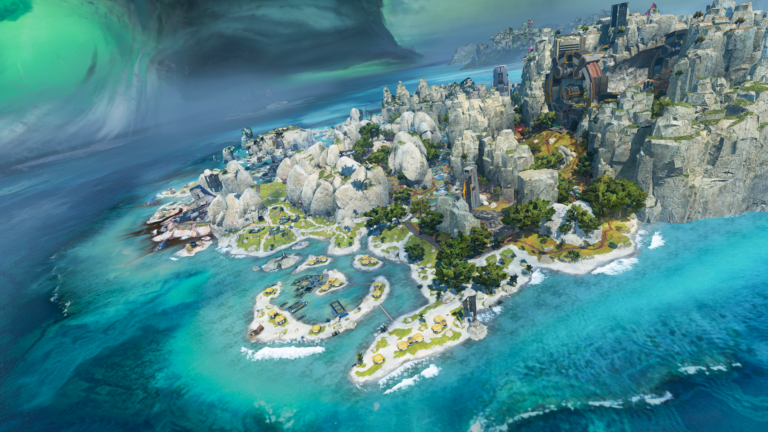 Apex Legends’ the maps are one of the many aspects that set it apart from other battle royales. As well as giving players interesting worlds to explore and battlegrounds to compete in, they’re essential vehicles for lore updates, clues to future events, and limited-time modes, making everyone from Summit feel like a living, breathing thing.

At the time of writing, SummitThe Battle Royale mode features four maps: Kings Canyon, World’s Edge, Olympus, and Storm Point. These four maps are sprawling locations that provide plenty of room for squads to fight and loot their way to first place. All four maps have received updates since release, which helps keep them interesting and constantly evolving. While each map has its ups and downs, quite literally, we take a look at how they all stack up against each other.

East Storm Point Apex most recently introduced card: She arrived in Season 11 alongside Ash. It’s the largest map in the game in terms of area, and it includes a huge amount of verticality, giving movement legends a chance to shine. It also features several PvE battles that provide suitable loot for those who complete their (not so) big challenge, allowing opportunistic players to loot quickly. Its tall structures and long sight lines make it a sniper’s paradise.

Unfortunately, Storm Point’s most important features are also its biggest drawbacks. The map is often too big for its own good: players usually have to travel a long way before encountering an enemy squad, and racing the new, more damaging ring can sometimes punish squads that land on the fringes of Storm Point. Getting to the top of landmarks and their structures can be troublesome if you’re not playing a character with powerful movement abilities, with snipers often adding insult to injury for these movementless legends.

Storm Point POIs are larger and more dispersed than most POIs on other maps. While this helps the map blend more smoothly, it can be difficult to tell where a POI begins and ends. Travel between points is often made easier by the map’s gravity cannons, which provide less movement through the air for those using them and make it harder for players on the ground to fire them compared to, for example, towers of Olympus jumping.

Storm Point seems to be an experiment on the part of the Summit the development team, and it’s always great to see them try new things. It’s also worth mentioning that as the most recent map, Storm Point hasn’t received as many updates and changes as other maps, so it will almost certainly change significantly over the seasons. future. Until then, its relative unlovability compared to other cards puts it at the bottom of our list.

3) Edge of the World

The edge of the world was Summitthe second card. Introduced in Season Three, it brought entirely new biomes to the game, like the icy remains of the Epicenter and the lava-strewn paths of the Dome. From a lore perspective, World’s Edge focuses on the Hammond Corporation and its mining operation, which over the course of several seasons destroyed the map and brought its ecosystem to the brink of destruction.

World’s Edge offers one of the greatest visual varieties on any map, making it feel like traversing an entire planet without Actually crossing an entire planet. (Looking at you, Storm Point.) It’s the second-largest map in the game, but it rarely feels so big that rotations are a chore, and you’ll almost always run into someone else while running past the ring. This way the map is very well paced.

But it still has its flaws. One of the most important is Fragment, a large POI divided into East and West segments. Fragment has long been known as a popular drop location despite its relatively poor loot and high chance of death upon landing. While developer Respawn apparently nerfed the loot in both halves of the POI a few seasons ago, that didn’t do much to deter teams from landing there. The shard will likely always be a point of contention for players.

World’s Edge also suffers from a weird loot distribution. Despite its visual prominence, the Epicenter was never a good place to land if you want to loot right away; as mentioned earlier, Fragment also doesn’t have much loot. If you go too far in any direction on the map, the loot thins out and becomes less interesting overall.

The high concentration of powerful loot during Rampart’s takeover of Big Maude City helped somewhat, but the map could probably use some adjustment to the loot location and rarity. World’s Edge is a fun map that has come a long way since its introduction, but it could probably use a few more tweaks.

2) Canyon of the Kings

It’s hard to go wrong with the original. Kings Canyon is the map that Summit launched with, and as such, it has been modified a large number of times since that very first season. Players witnessed the destruction of Skull Town, a POI rivaled only by Fragment for its ability to cause hot drops, the crashing of a ship that accompanied the introduction of Fuse in the Apex games, and the rise of Relic, a POI that mixes the old with the new.

During Season 14, the map received a massive update called Reforged that adjusted just about everything on it. Reforged added land mass to the map, making it less small compared to other maps. It also opened up new rotational potential to prevent frequent thirds, which had previously been a major complaint from players; the cliff-like interior of the map has been adjusted for the same reason. Finally, Reforged redistributed loot across the map, making the looting process fairer and encouraging players to visit points of interest they hadn’t abandoned in a while.

Thanks to these changes, Kings Canyon has held up incredibly well since launch. Even so, it can still be somewhat awkward to play on. Certain points of interest, The Cage at the forefront of them, encourage high refueling and shooting for miles, which can be difficult to tackle. Relic isn’t quite as fun as the old Skull Town, and it hasn’t become as much of a hot drip magnet as its predecessor, though that’s probably a good thing.

Despite changes to map rotation paths, third parties are still an issue. Players often complain about how their kills are frequently stolen from under them or their fights are interrupted by a team that ends up obliterating everyone. Even so, Kings Canyon is much better than before. It now looks like an example of how old maps can be brought into the present with smart design changes that feel fresh even for players who’ve been playing since pre-season.

Olympus is arguably the best battle royale map in the game. Introduced in season seven and updated several times since then, it’s a versatile and visually interesting map with an extremely high level of polish. It offers plenty of rotational paths and movement potential through its Trident vehicles and jump towers, which doesn’t rule out non-movement legends.

One of Olympus’ greatest strengths is that it doesn’t have an over-selected hot deposit location like World’s Edge, which means players are more likely to be spread across the map when a match begins. It also has a variety of high walls that allow for long sightlines but do a good job of preventing third parties. The mechanical and organic architecture of the map mesh extremely well, creating a cohesive whole rather than a collection of connected points of interest.

Olympus offers a huge amount of ways to approach battle royale. Want to get great loot immediately without being overrun? Go down to the docks and head to the high level loot bin in the back. Do you prefer to fight early and grab some good loot at the same time? Estates and Energy Depot are for you. Looking to take long shots across the long green stretches of the map? Solar Array has plenty of sniper gear. The map supports almost all playstyles and preferred experiences.

No card is without flaws, and Olympus is no exception. The Turbine is a troublesome choke point that acts as the de facto spin lane for most of the map’s northwest quadrant, and it’s usually full of thirds. Some of its less visited POIs, like Orbital Cannon and Carrier, could use a little boost to entice players to land there. The area around Hammond Labs is so open that it’s usually impossible not to get shot while running, which can make for a frustrating experience.

Those quibbles aside, Olympus is still the best of the bunch. It remains to be seen what will happen to future battle royale maps, but until then if you’re looking for the best battle royale experience Summit has to offer, we recommend waiting for Olympus to appear in the map rotation.