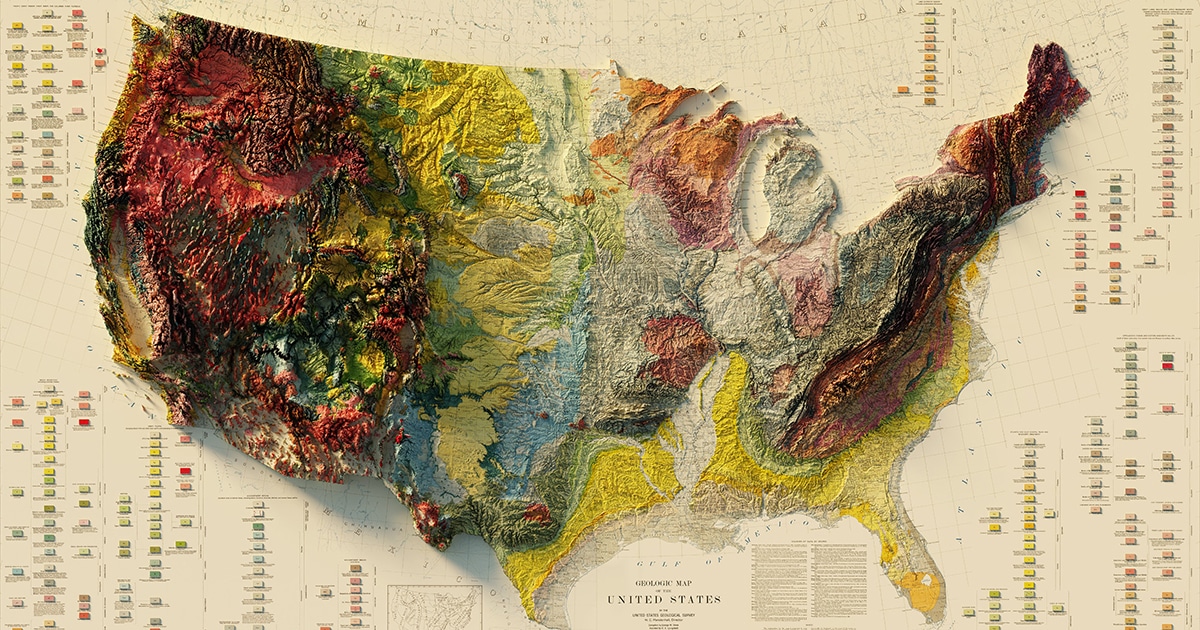 Muir Road | $ 89 +
1932 geological relief map of the United States, created from a cartographer’s scan of the 1932 original Sean Conway.

In the old days, every motorist had a bulky road atlas and fragile paper maps. Now the digitized maps of the world are at your fingertips. Since ancient times, maps have informed users of their geological environment. However, they are also a fascinating recording of the change in the way humans understand Earth. With this long tradition of cartographer, cartographer and specialist in ortho-imagery Sean Conway uses modern expertise to enhance old maps with accurate elevation data. A current project, the maps are available as stunning prints that challenge the eye to appear as three-dimensional reliefs.

Trained in geography and cartography, Conway began the series of vintage map reliefs as a personal project. For each piece, he begins by choosing a specific vintage card from a wide variety available in high-resolution online scans in the public domain. Then the elevation data from science databases should be overlaid on the map – think of it as if you were pressing another map on top; they have to line up. In order to add the correctly scaled data, Conway must first georeference the old map. Georeferencing a map is determining exactly what area it represents and what projection it represents, which means that the lines of scale, longitude and latitude must correspond to modern mapped elevations. Some maps have already been georeferenced, including some by the US government. Others are old and technically inaccurate. For such projects, Conway distorts the elevation data to retain the shape of the vintage map. 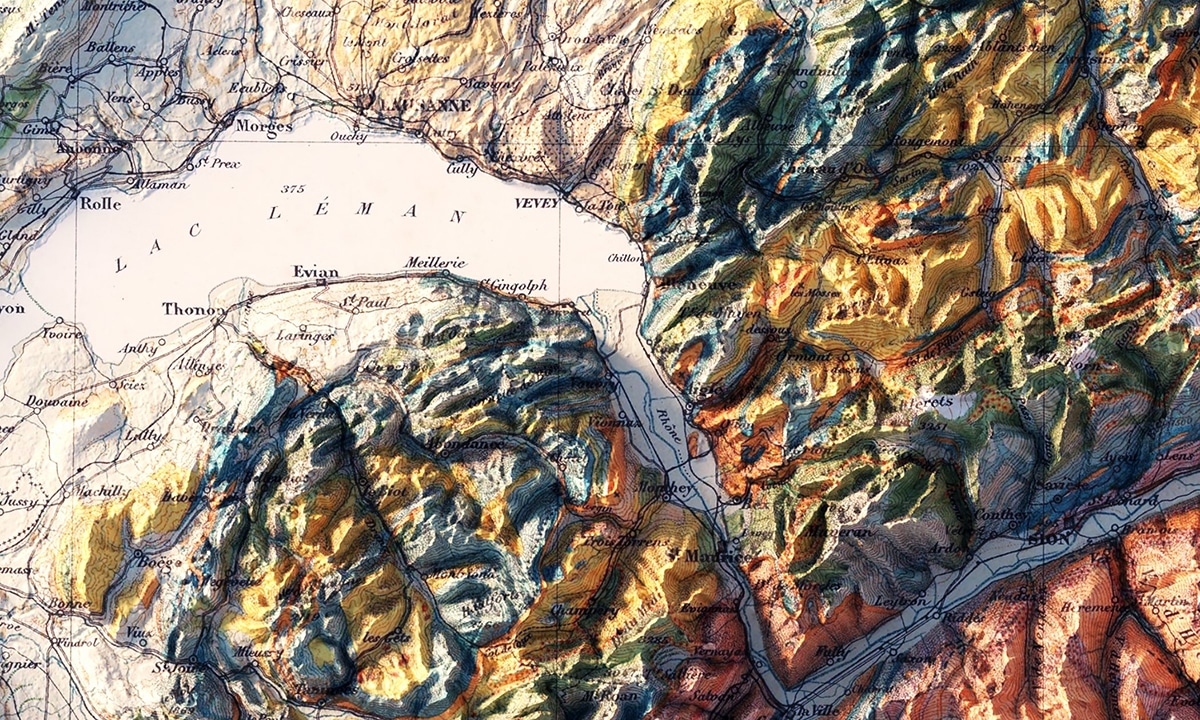 A close-up of Lac Lemain on the map of Switzerland, Geologische Karte der Schweiz 1911.

Once the period map is georeferenced, this data is entered into a geographic information system (GIS) software called ArcGIS Pro. In this software, cartographers can analyze data, as well as create 2D and 3D maps and models. Here, Conway can process the elevation data in the georeferenced map, essentially aligning the modern data with the old map. For the final touch, the project migrates to Blender, an open source 3D creation software. The end result is a map that retains all of the vintage charm of the original, but with detailed elevation modeling perfectly layered. While most ancient maps were initially topological, the hyperrealism of the 3D effect brings geological features to life.

Since the start of the project, Conway has produced numerous vintage relief maps. Regions represented include Alaska, Switzerland, Grand Canyon, Brazil, Crater Lake and many more. While Conway is happy that people think maps are art, he says, â€œI’m much happier to hear when people tell me that it has helped them understand or better visualize geological properties or geographies of the earthâ€¦ Or how 3D maps help them understand physical processes. It’s really interesting to see the demarcation of geological colors on a map in addition to the 3D effect. You can really see where the geological phenomena change just by uplift or exposed valleys. “

For the scientist or nature lover in your life, high quality prints are available in various sizes on Muir Way – they make perfect gifts, especially for those who love the outdoors. you can follow it on Twitter. 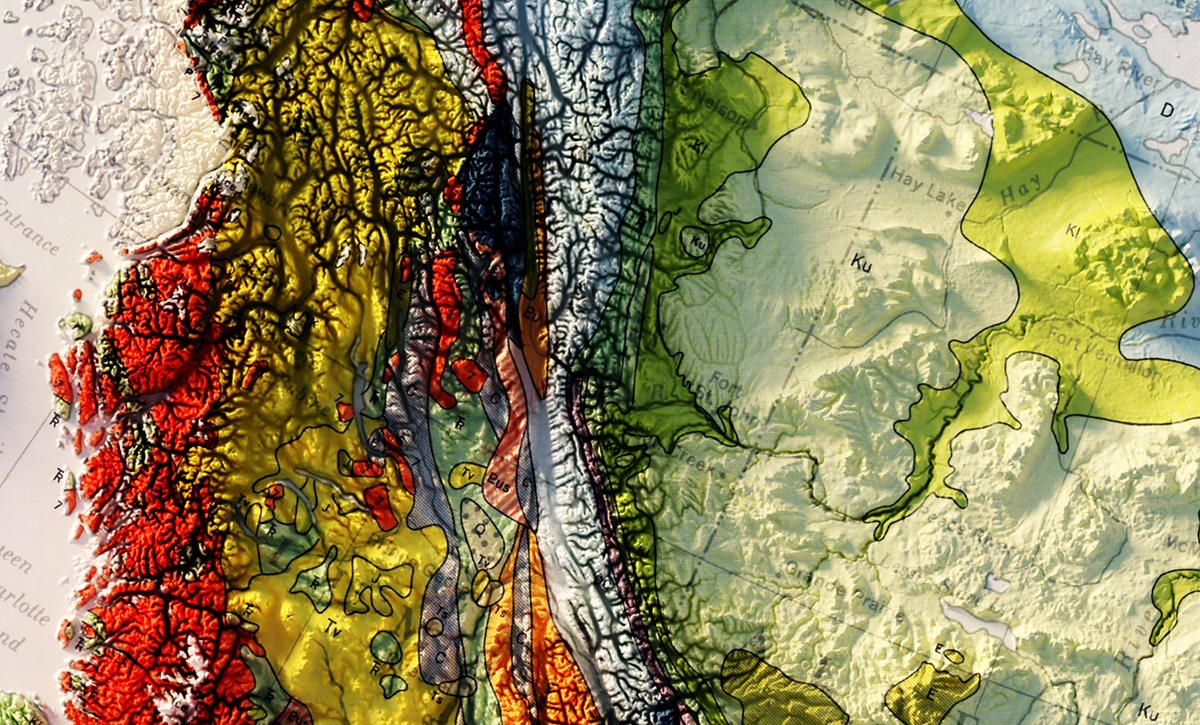 Close-up of the 1956 relief map of Canada, based on a map from the Department of Mines and Technical Surveys. 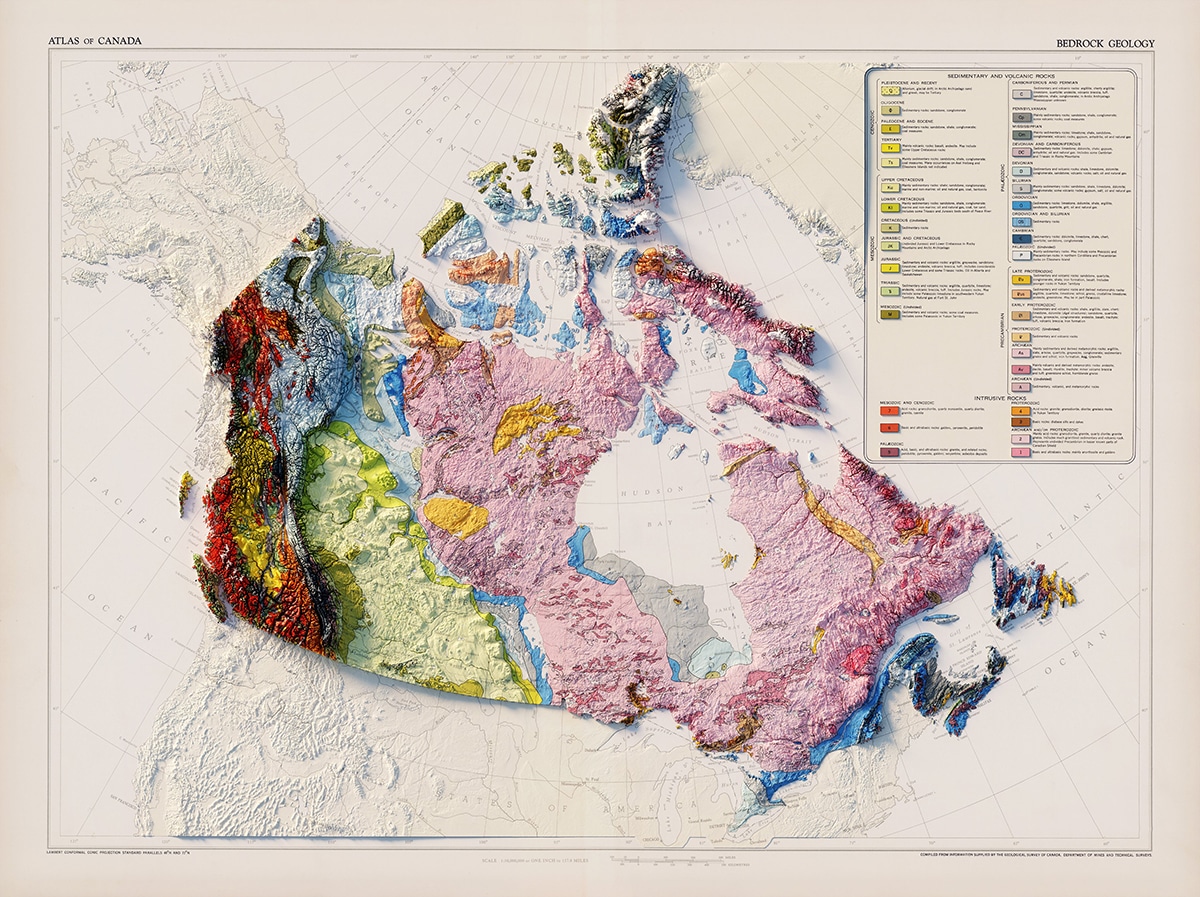 By choosing old maps available online, Conway georeferences each map by aligning it with data points that can be entered into a geographic information system (GIS). 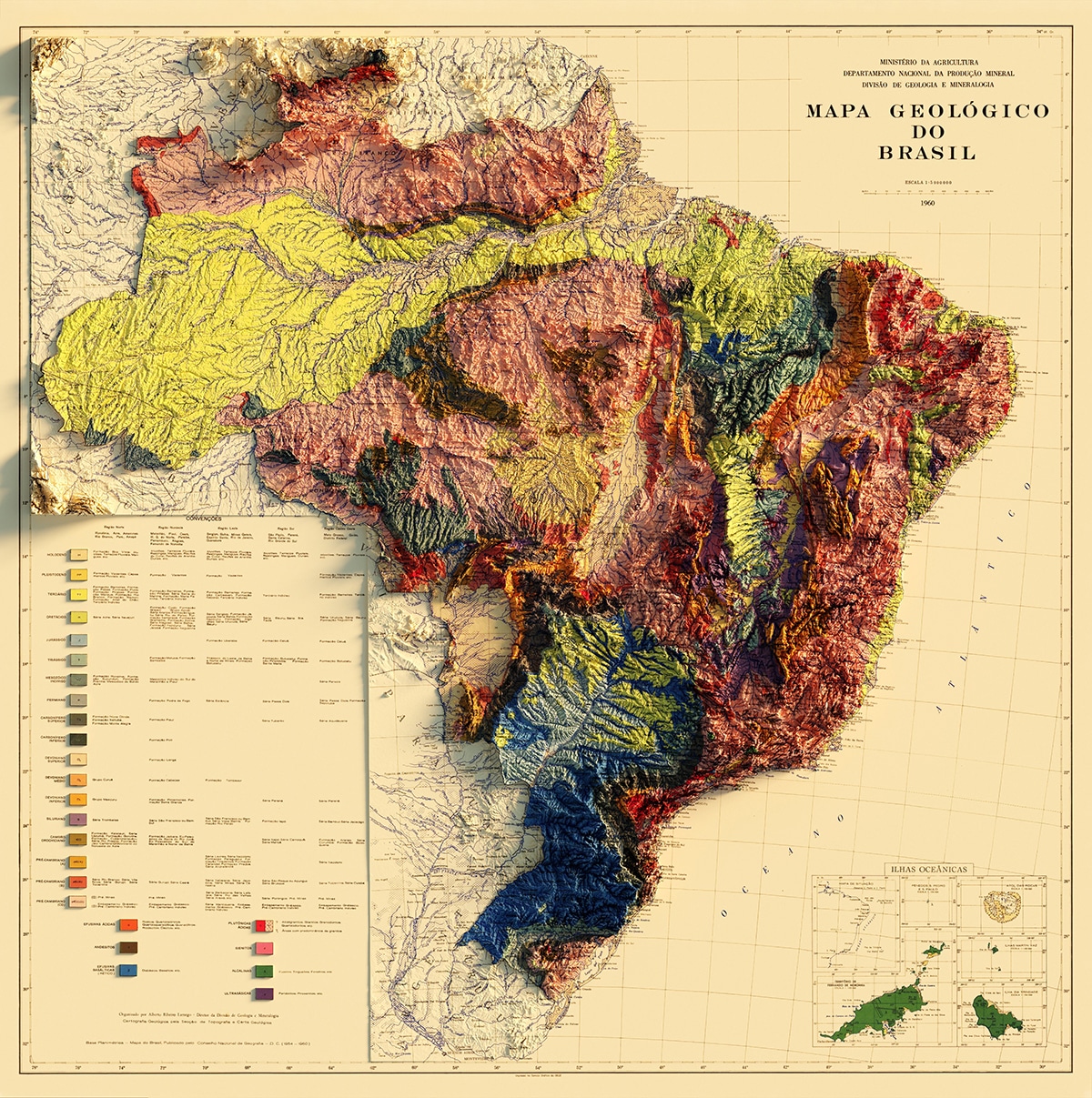 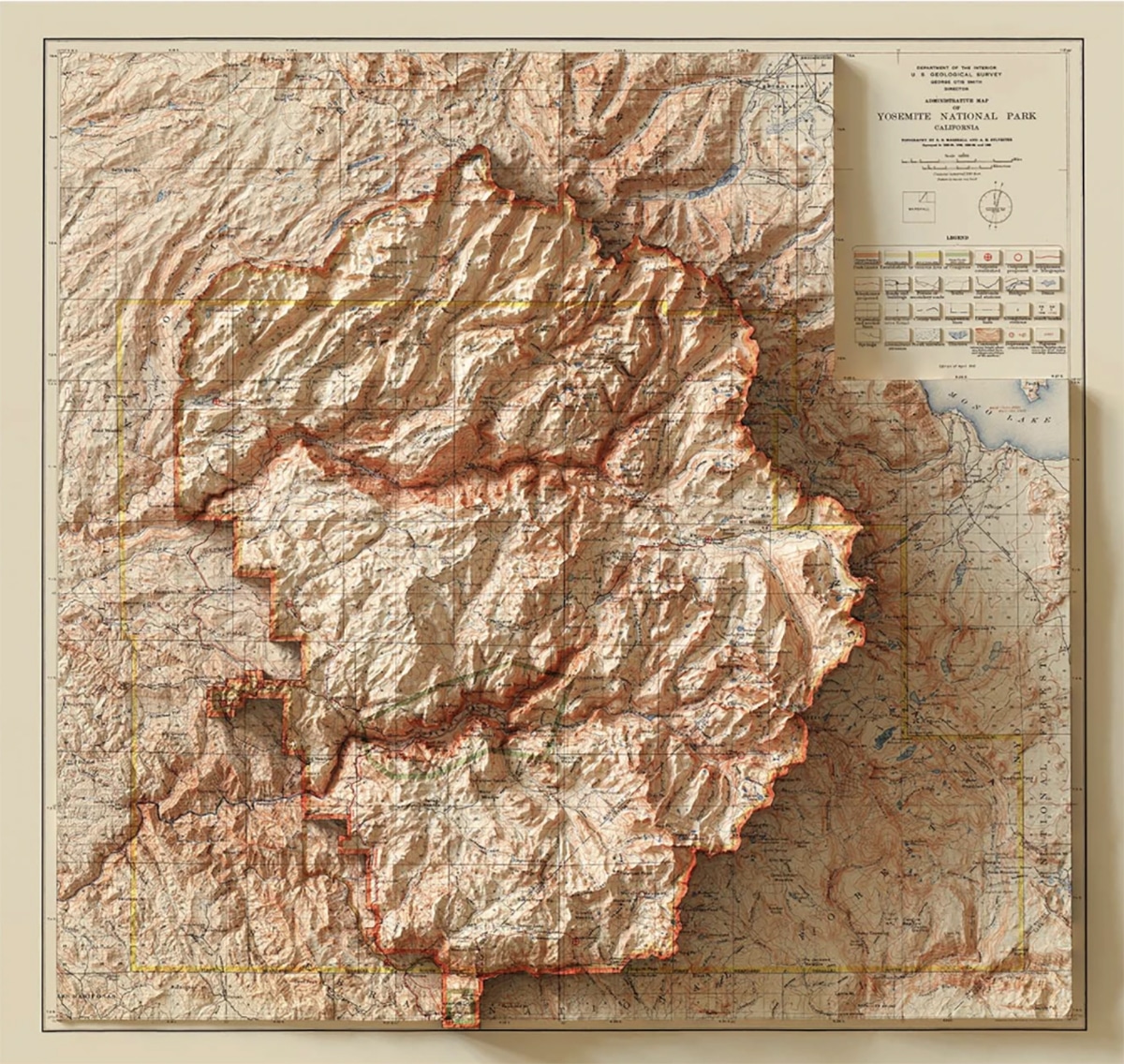 Once the vintage map is georeferenced, it can then be combined with detailed elevation data in 3D GIS software. 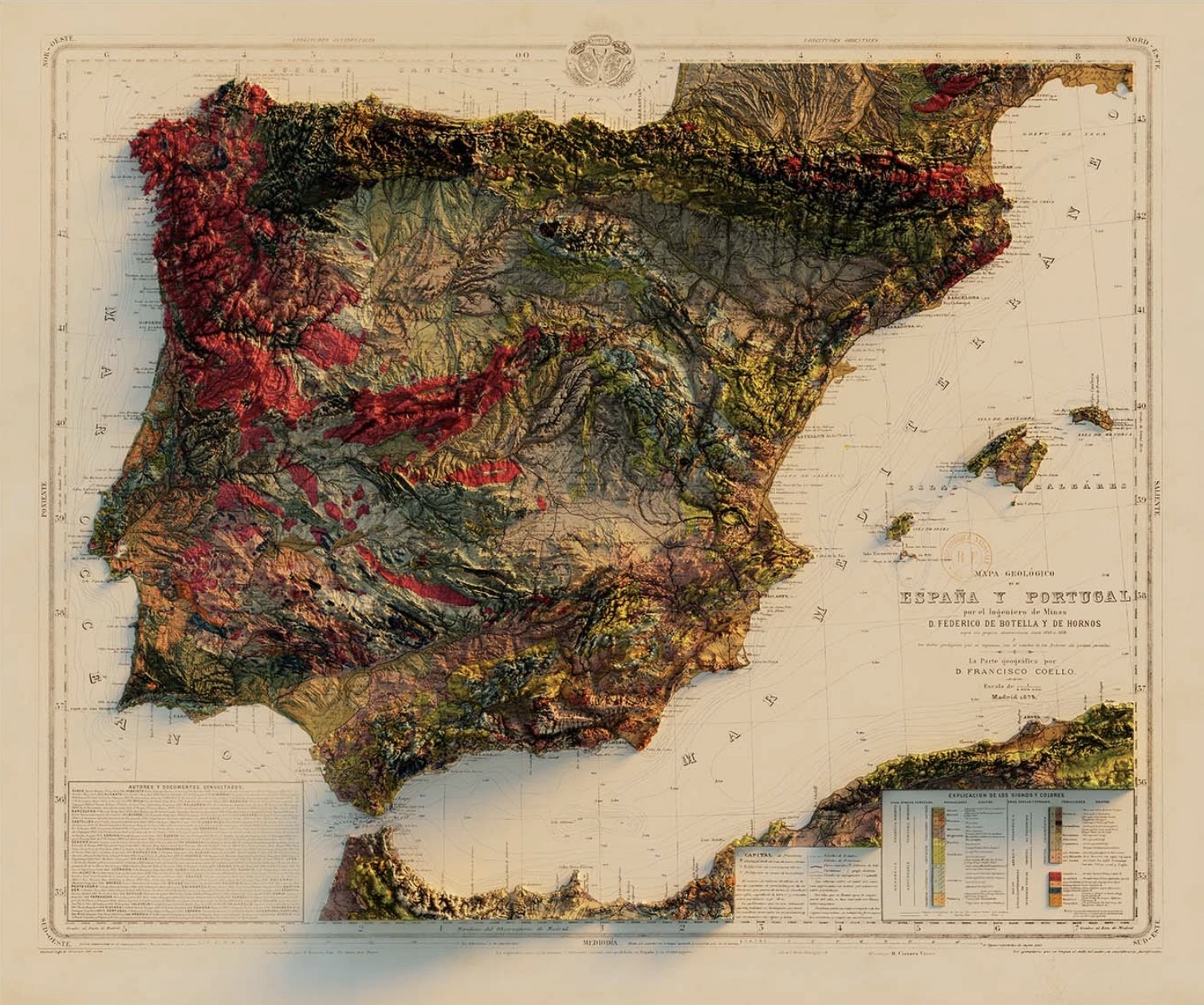 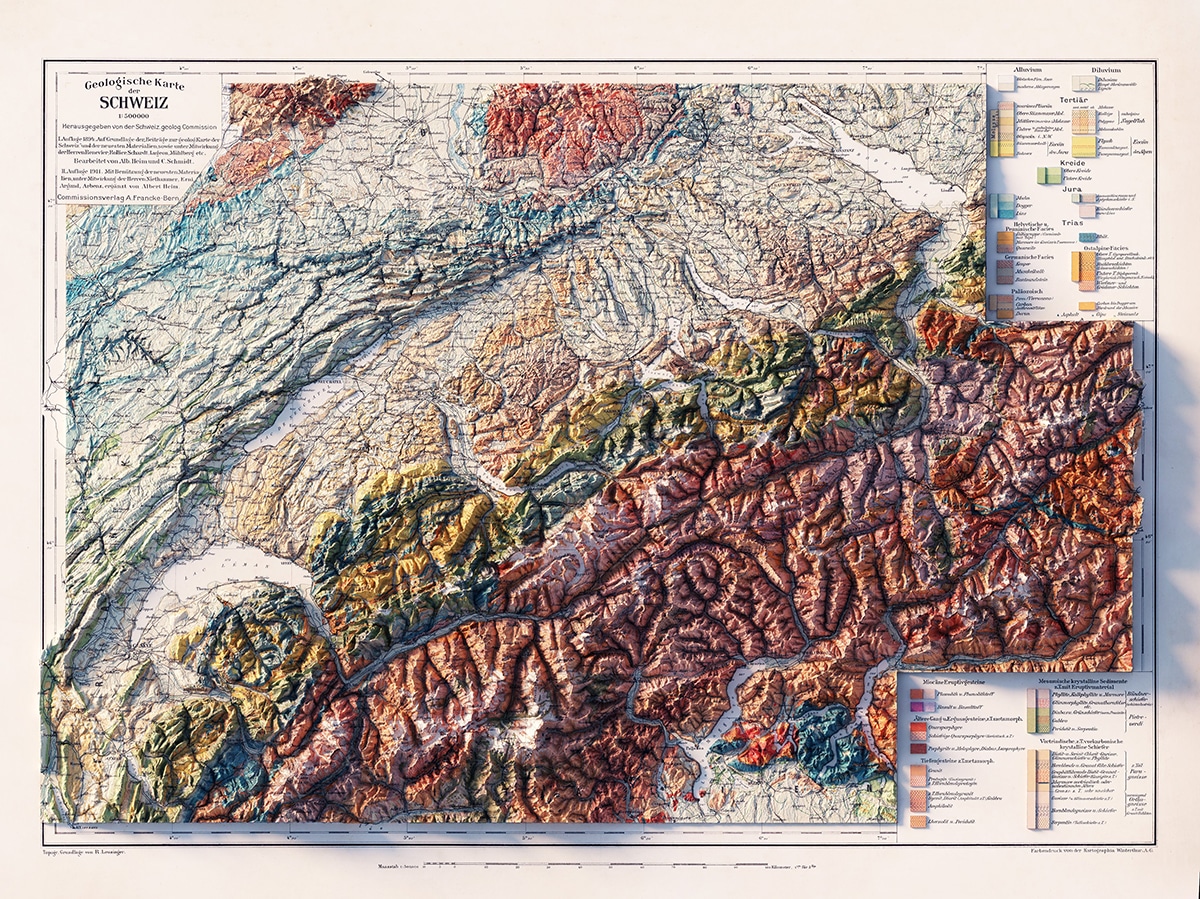 Geology of the Karte der Schweiz 1911 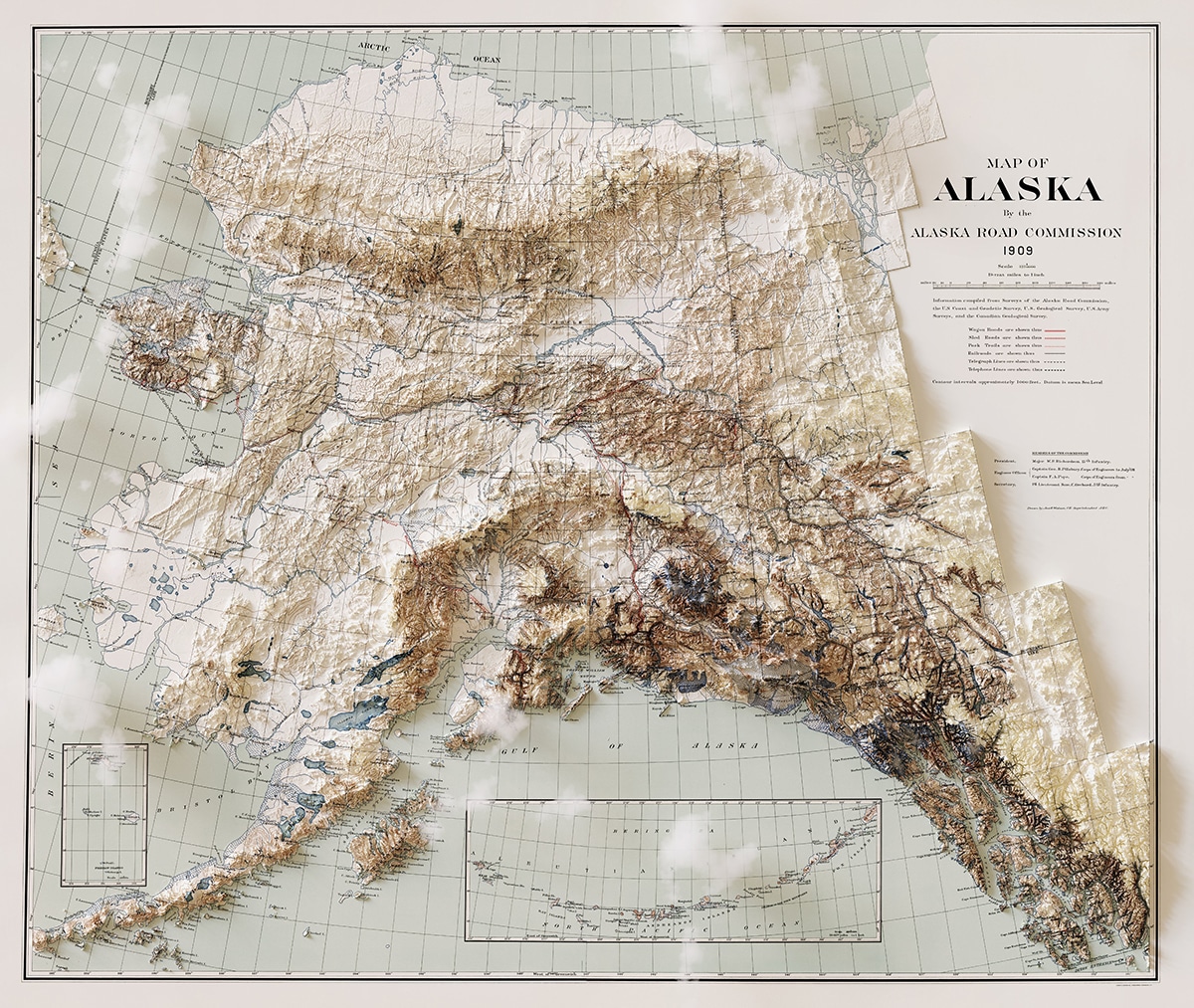 Adding the finishing touches to the 3D Blender editing software, the final period relief map is a stunning representation of geology and geography. 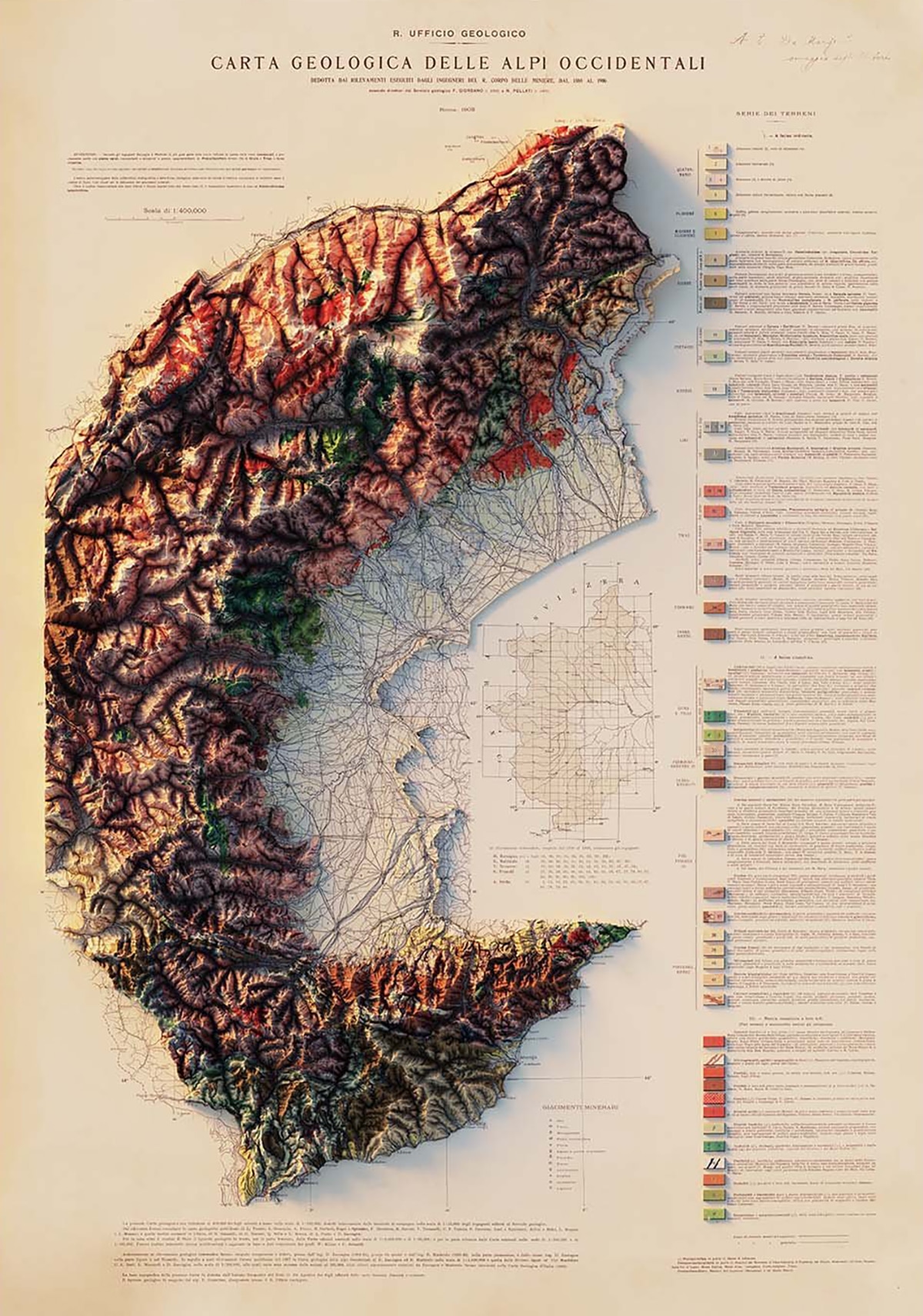 Relief map of the Western Alps 1908 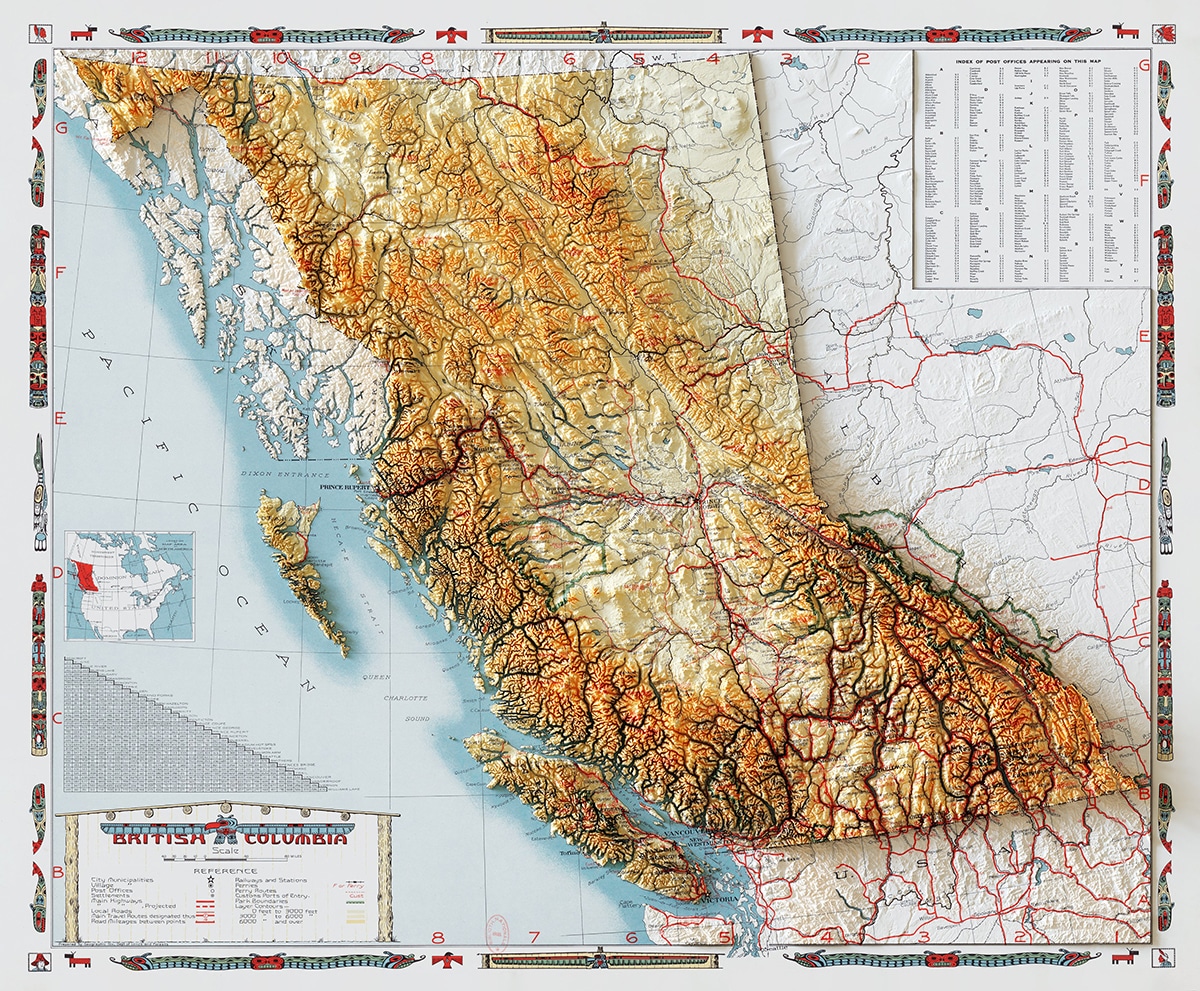 Conway started the project for fun; but due to the growing interest in his work, he started offering wonderful art prints on Muir Way. 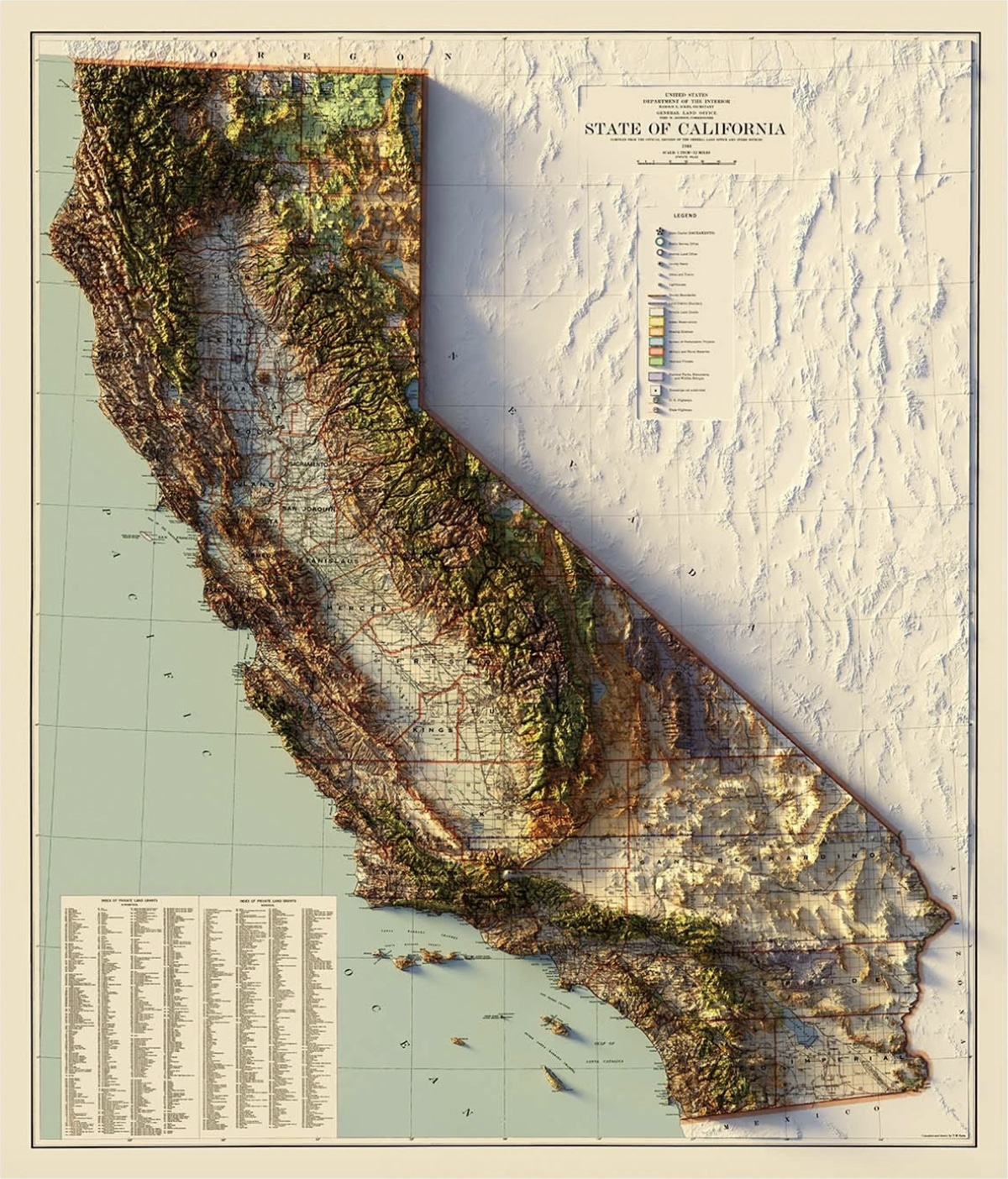 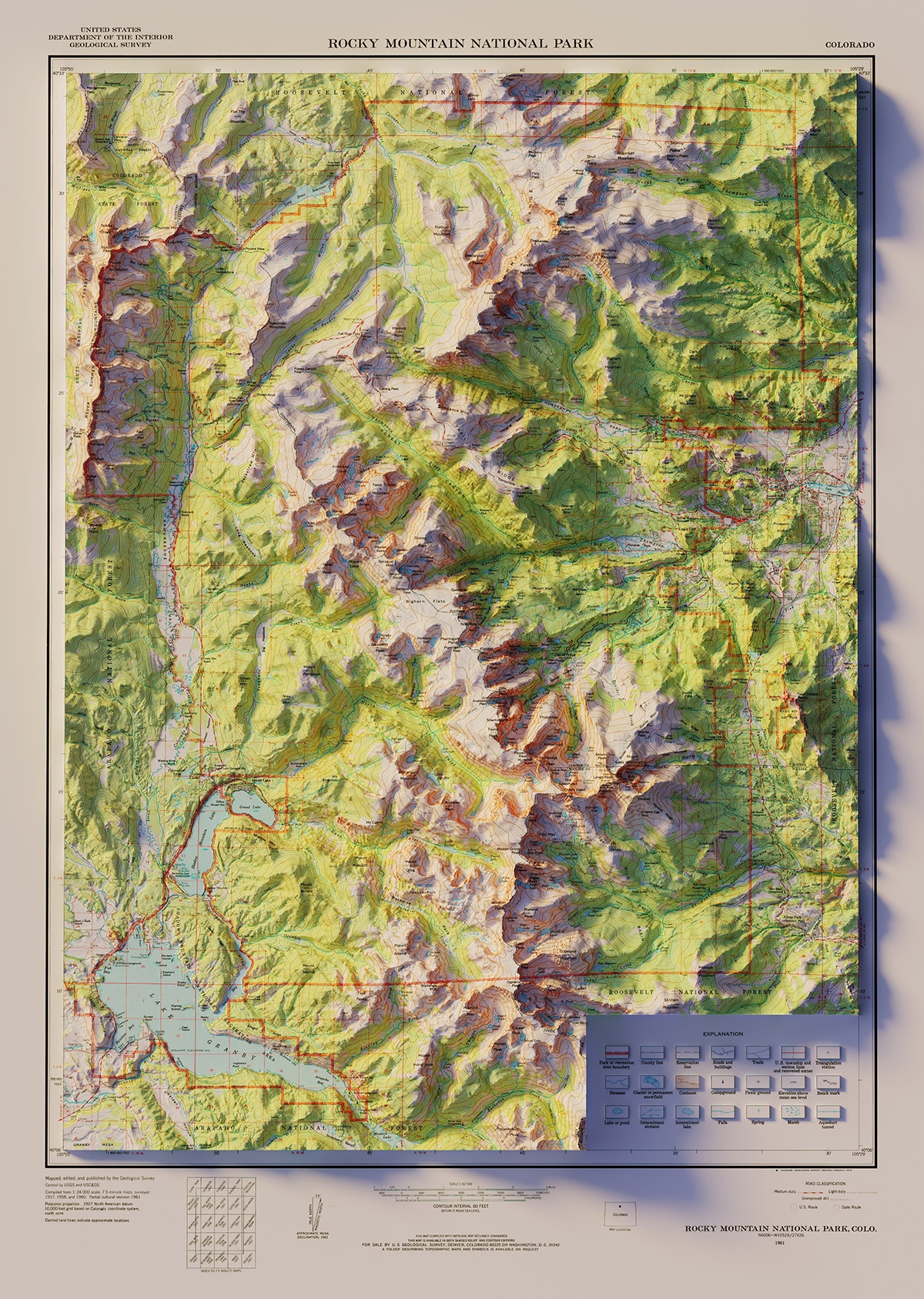 While his work is magnificent, Conway hopes it is also educational and that viewers see topography and geology in a whole new light. 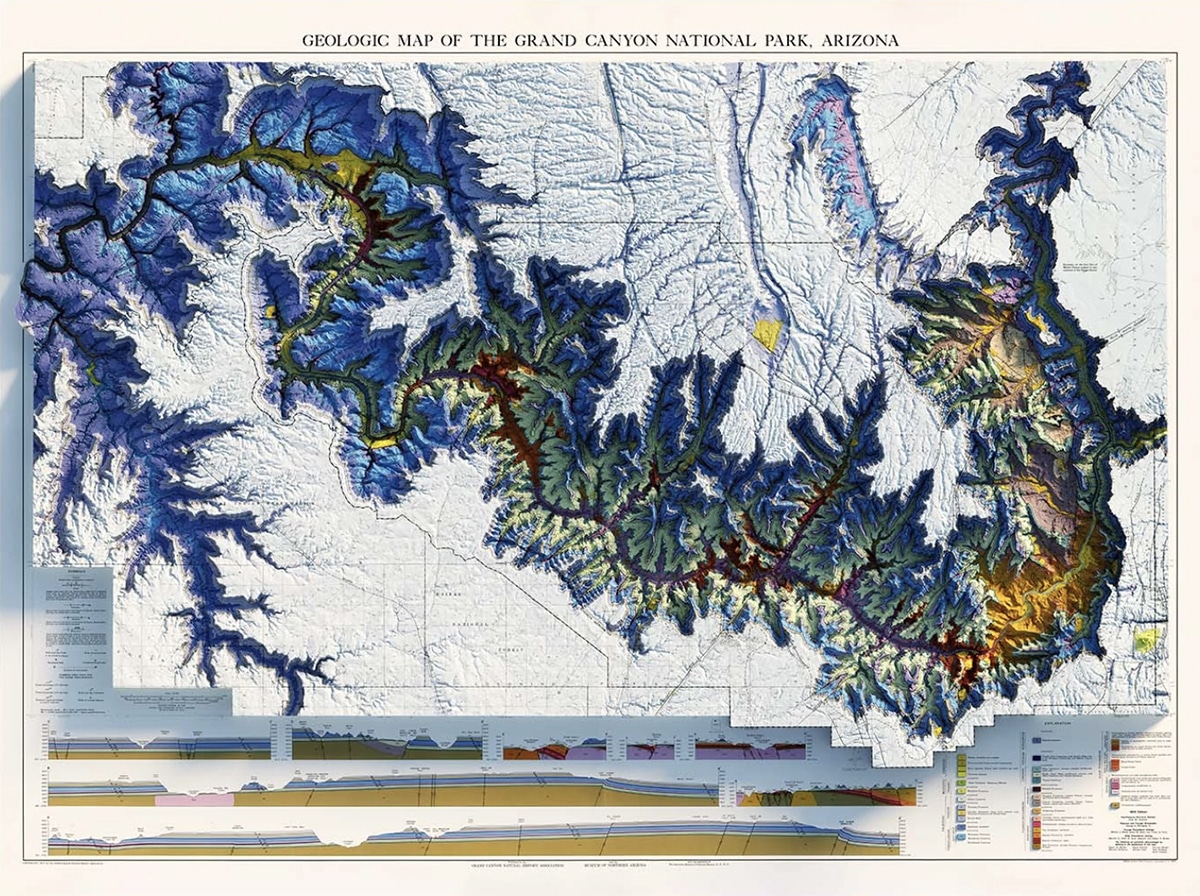 My Modern Met has granted permission to feature photos of Sean Conway.

Download over 91,000 cards from the world’s largest private collection

Cartographers have secretly hidden illustrations in maps of Switzerland for decades

The first maps of geological strata, a documentary by Oliver Sacks and a new scientific podcast