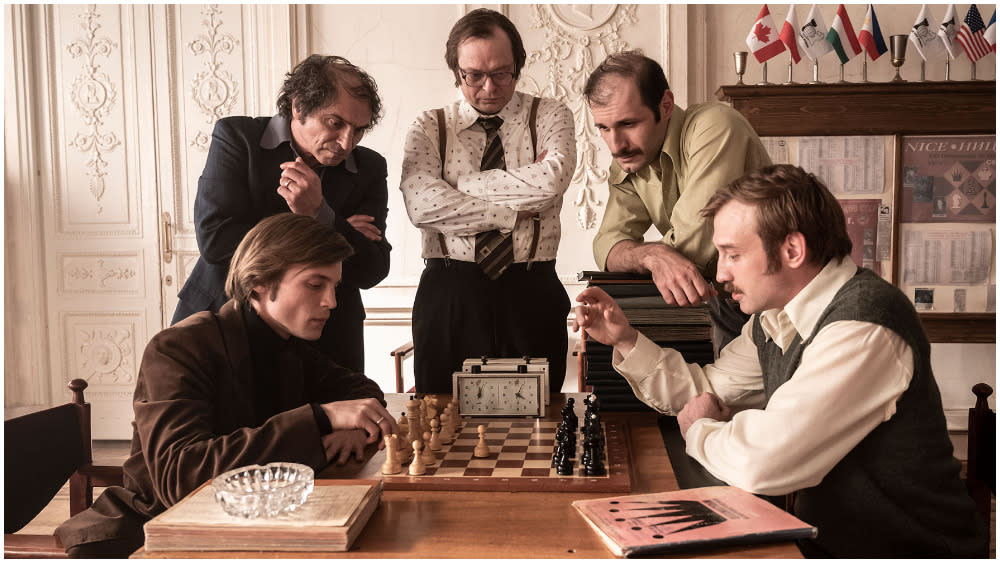 When the Soyuz MS-19 spacecraft takes off from the Russian Baikonur Cosmodrome on October 5, bound for the International Space Station, Vadim Vereschagin – CEO of the production and distribution giant Central partnership – thinks that the prospects for his company will also rise in the stratosphere.

On board the ship will be director Klim Shipenko and actor Yulia Peresild, who embark on a 12-day mission to film scenes from the upcoming drama.The challengeÂ»On board the station. Produced by public broadcaster Channel One and leading studio Yellow, Black and White, in collaboration with Russian space agency Roscosmos, the first feature film of its kind will be distributed by Central Partnership.

Vereschagin says the cosmic shoot is a “dream” for him personally, as well as a milestone for a company that is celebrating its quarter century this year. â€œThis project, for us, is the highlight of all 25 years we’ve done so far,â€ he says. â€œYou look at him, and it’s crazy. This is something that has never been done before. “

From its humble beginnings as a television production company, Central Partnership has grown into a powerhouse of production and distribution. It has distributed a series of commercial blockbusters, such as the WWII epic “T-34” and the hit comedy “Son of a Rich” – the highest grossing Russian film of all time – and has a Dominant grip on the exhibition industry in Russia: last year its distribution arm claimed a market share of almost 30% of the total box office. The company’s library includes titles from top US and European studios – since 2009 it has been the exclusive distributor of Paramount Pictures in Russia – as well as an extensive catalog of arthouse films from the domestic industry in full growth.

Vereschagin attributes the company’s ability to adapt to an ever-changing landscape as a key component of its sustainability. â€œIt is the oldest company on the market in Russia,â€ he notes. “A lot of businesses that started at the same time are gone and have been for some time.”

This week, Central Partnership will attend CineEurope Barcelona, â€‹â€‹marking the first time that a Russian distributor has presented its international content at the exhibition industry conference. Topping its list are a slew of ambitious titles with distinctive touches – epic human dramas, lavish production values, stories crafted for the big screen – that have become a calling card for the company.

Highlights include “The World Champion”, a headline story centered on the legendary 1978 chess match between Soviet world champion Anatoly Karpov and dissident Viktor Korchnoi, directed by the director of “T- 34 “Alexey Sidorov. , and “December”, which focuses on the last days of Sergey Yesenin, a famous Russian poet and lover of American dancer Isadora Duncan. “Shipenko from” The Challenge “, who also crossed out”Rich son, â€Is attached to the live.

Another highly anticipated title is “The First Oscar”, which is inspired by the true story of the directing of “Moscow Strikes Back”, the winner of the first Oscar for Best Feature Documentary in 1943. The film is produced by Natalia Mokritskaya , whose credits include â€œBattle of Sevastopolâ€, â€œJumpmanâ€ and â€œZoologyâ€. â€œWizard of Emerald City,â€ a CGI-laden fantasy family epic, and â€œGuest from the Future,â€ an adaptation of the iconic Soviet sci-fi novel â€œOne Hundred Years Ahead,â€ created with â€œThe Producers of Stalingradâ€ and “Invasion” Fedor Bondarchuk, Michael Vrubel and Alexander Andruschenko.

At a time when streaming services around the world have seen the number of subscribers increase – a trend not created, but certainly fueled, by the coronavirus pandemic – Vereschagin is convinced that the future of the exhibition industry is bright. , although it relies on the type of tents and event movies that can draw audiences off the couch. â€œIt doesn’t necessarily mean they’ll be fantasy, action, sci-fi movies,â€ he says. â€œIt’s not about the genre itself. It’s about the scale of the film, the emotion that this film brings to the audience.

As Hollywood studios increasingly consider hybrid releases of hit titles like “DuneThat Warner Bros. launched day and date on his streaming service HBO Max, Vereschagin is a staunch supporter of the theatrical model. â€œWe’ve had a lot of conversations this year about creating hybrid versions, and we’ve decided not to do it,â€ he says. “We’re going to hold the window.”

He concedes that “platforms are willing to pay a lot of money for hybrid releases,” a phenomenon that only gained momentum during the pandemic, as movie theater closings and nervous audiences made viewing more difficult. home an attractive option for many potential films. amateurs. But Vereschagin also sees it as an existential struggle for the future of the industry that goes far beyond today’s results.

â€œThe long-term problem with hybridization is that at some point you’re going to train the audience to be ready to watch it on a platform, and that kills your exhibition business,â€ he says. â€œWe are not ready to support this. Theatrical distribution has been around as long as movies have been around, so let’s keep it that way. “

Although the coronavirus pandemic caused a three-month shutdown of Russian industry last spring, production of a plethora of Central Partnership titles quickly kicked off. â€œWe had a pipeline going. We continued to produce films, â€says Vereschagin. â€œIt actually helped us go through this whole pandemic. We had a list – not only for national distribution, but also for international distribution. Even though the domestic and global box office has shrunk over the past year, “we have managed not only to survive, but also to increase our income,” he adds, international sales income during the pandemic having increased by 50%.

This sparked one of the main takeaways from last year for the Central Partnership Summit. â€œThe first lesson learned is to make sure that you still own a large part of your library. Don’t sell it to anyone forever; keep those license agreements short because you never know when you might need that content, â€he says. “We were fortunate to have a lot of our library available when the pandemic hit, and all of a sudden every streamer needed this content.”

To ensure the library is stocked and the production pipeline continues to flow – especially when the rapidly growing domestic streaming services sparked an arms race for Russian talent – Central Partnership signed a number of prominent deals with top studios such as Kinoslovo, which produced the Netflix period romance “Silver Skates” and genre specialists QS Films. It has also teamed up with the Latin American cinema group BF Films on psychological horror “Schizophrenic”, marking the very first co-production between the two industry giants.

Vereschagin says there will be more international co-productions to come, offering a glimpse of what lies ahead as Central Partnership embarks on the next 25 years of its journey. â€œI think in Russia we have reached the limit of what we can do,â€ he said. â€œWe are looking globally now. This is our strategy. There are 140 million people living in Russia. There are still 6 billion people living outside of Russia. This is our audience.

The best of variety