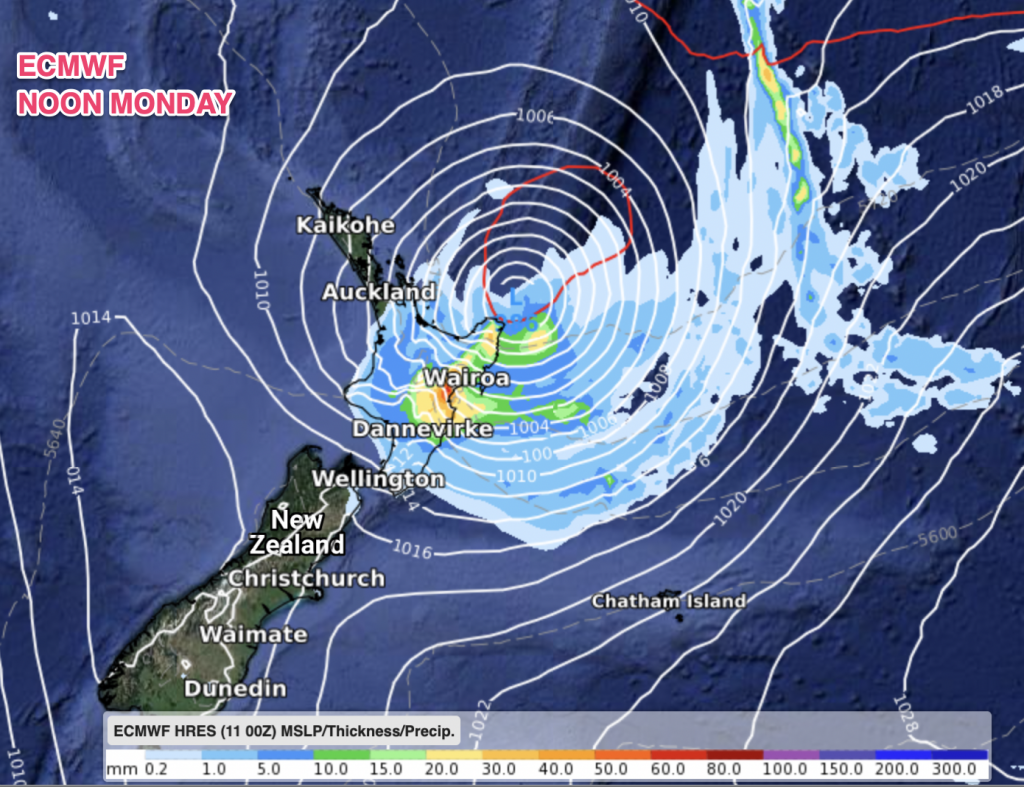 Development – Tropical Cyclone Cody intensified overnight to become a Category 2 storm, despite moving southward away from the equator. La Nina helps raise sea surface temperatures in our part of the world and the marine heat wave that’s happening in parts of the North Island can help keep Cody out of a powerful storm as she passes later. this weekend or early next week.

This map – from Project Moana – shows how warmer than average it is currently around the North Island. Warm waters like this fuel storms.

While Cody will technically lose the “tropical cyclone” part of the name by the time it reaches New Zealand, the storm itself can still produce similar gales and rains. The ex-cyclone should then impact the North Island with a chance to directly hit / hit the upper eastern part of the North Island (East Cape or Bay of Plenty, for example).

High pressures further south and west and east will also play an important role in guiding this storm… so yes, there are still uncertainties as to the precise tracking of the New Zealand area. It’s not locked yet, but the data is more and more aligned.

WILL CODY MISS THE NZ?
There is a chance that this will happen – as with any cyclone moving north to south, our narrow country also stretches north to south … that means a slight movement further east or west for Cody will have significant impacts on our forecasts. But modeling suggests there is a moderate to high chance that New Zealand’s weather – and certainly our beaches – will be affected by Cody for some time this weekend through the start or middle of the week. next, mainly on the North Island.

WeatherWatch.co.nz says those on the upper North Island and east side should be prepared for wind and rain. Destructive gales can brush through the northern and eastern areas, while rain seems more likely in the eastern areas, with more than 200mm already forecast in some models. This is enough to cause slips, floods and road closures. See the maps below for the latest estimates.

WHO IS THE BOSS?
Currently, the Fiji MetService is responsible for official updates to the government forecast on Cody, but by Thursday it will be handed over to MetService NZ for official updates. here (not the government agency NIWA, which is already using this storm to promote its business services against MetService through the media – no other country has a government agency that does this against its official government forecaster during storms. It should also be noted that NIWA is so commercially aggressive that it will not share its tax-funded IT tracking with the private weather sector.).

MetService will be producing its own tracking map for Cody today, which will help show which parts of New Zealand are most at risk.

WeatherWatch.co.nz says it’s still too early to lock in precise tracking, so the “Cone of Uncertainty” – which shows the wiggle room where Cody can track – is the current best way to track the most areas. exposed to storms.

With the storm at sea for a number of days to come, there may not be much new information each day – but now we will be providing DAILY updates here on WeatherWatch.co.nz and RuralWeather.co .nz.

In the meantime, your hyper-local forecasts here at WeatherWatch / RuralWeather use IBM’s “Watson” supercomputer which analyzes ALL reliable models to produce the most probable forecast in your area. (In other words, if the maps and models are confusing you, our hyper-local forecasts do all the work and display it in one simple forecast, no matter which part of New Zealand you are looking at).

Regional MetService The warnings will likely not be issued until the weekend.