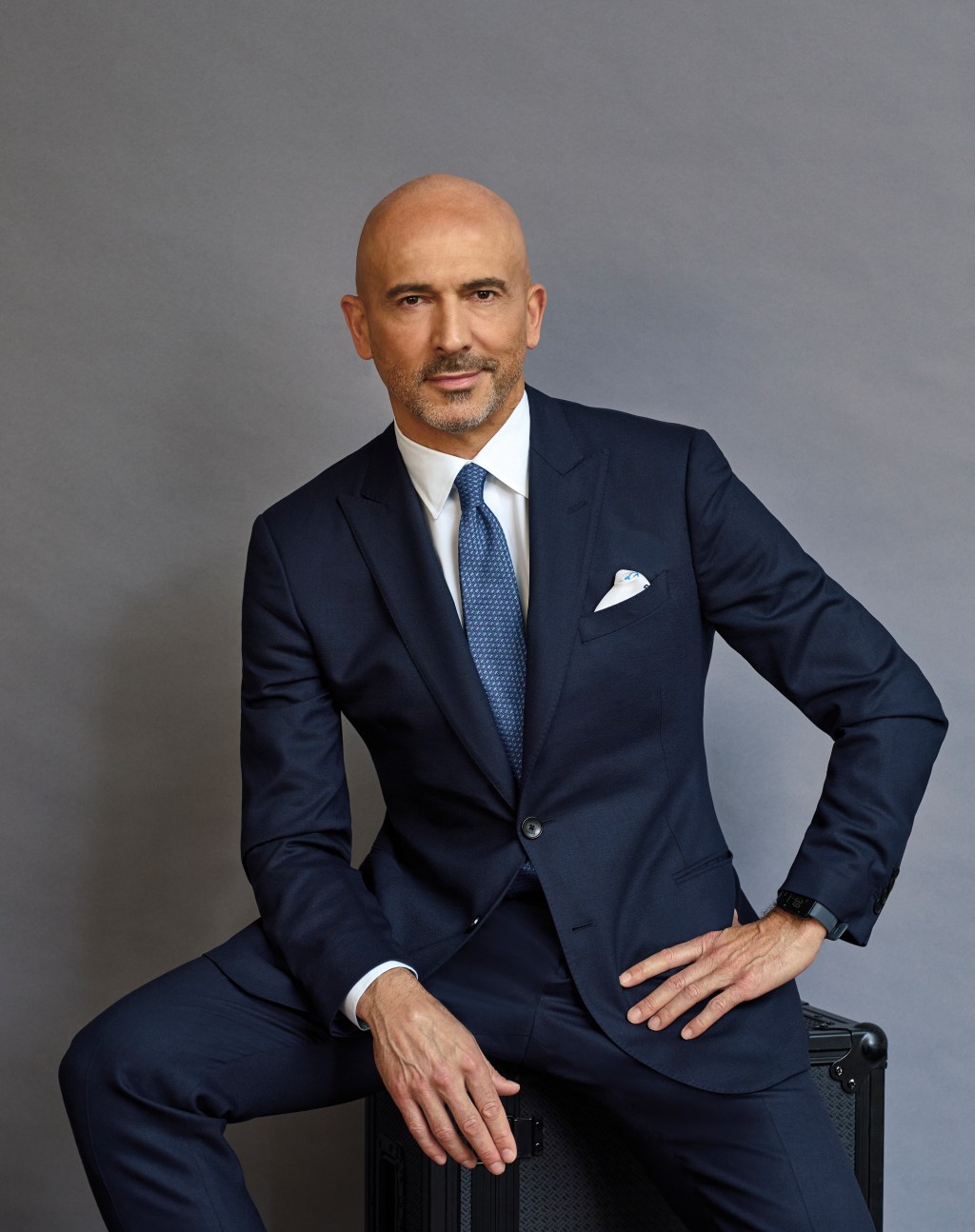 MILAN — “The planets aligned” when L Catterton and the Etro family agreed to set in motion the next phase of the Italian brand last July, believes Fabrizio Cardinali.

In his first interview since his formal appointment last December as chief executive of Etro following the closing of a sale of a majority stake to L Catterton, Cardinali, also an investor, highlighted the fund’s commitment and the Etro family to turn the company around with a long-term vision.

The first and most public step taken by Cardinali was to appoint Marco De Vincenzo as creative director of the brand in May. The designer’s first collection for Etro will be presented on September 23 during Milan Fashion Week. The executive revealed that in addition to the brand’s Spring 2023 range, De Vincenzo will launch a small see now, buy now collection of recycled archival fabrics that will be immediately available exclusively on Mytheresa globally, as well as on the Etro website.

This is representative of Etro’s goal to highlight Etro’s longstanding sustainable practices and reach a younger consumer through more contemporary tools. As well as praising De Vincenzo’s “use of color, knowledge of fabrics and fashion,” Cardinali said the designer is “a creative talent with so much good taste, but he’s also very down-to-earth, the feet firmly planted on the ground”. He appreciates the history of the company and realized that, although ahead on so many fronts, many initiatives were often unknown to the general public.

This includes highlighting Etro’s Made in Italy production and sustainable practices. For example, Cardinali cited the BenEtroEssere collection in a denim fabric that combines organic cotton and recycled elastane in sustainable processes reducing the consumption of energy, water and polluting chemicals, which was launched for the first time in 2002.

Kean Etro, who served as a menswear designer prior to De Vincenzo’s arrival, began speaking in 2001 of being green and responsible through his collections and runways, 20 years before environmental sustainability became a subject seriously taken into consideration by the international fashion industry. It launches certified sustainable alternative materials under the BenEtroEssere label.

“Etro’s codes and values ​​around art, culture, inclusion and self-expression are well defined and will remain, but they will be developed in a more contemporary way,” Cardinali said. “L Catterton, Marco, I myself am aware of these codes and in tune with the Etro family in modernizing the brand” – hence the planetary alignment.

Cardinali said the goal was to more than double Etro’s sales in 2021 and reach 500 million euros in five years. “In the first six months of 2022, we saw double-digit revenue growth,” said Cardinali, who draws on 25 years of experience in the luxury industry. He joined Etro from Dolce & Gabbana, where he held several positions within the company, most recently serving as Chief Operating Officer and Executive Board Member since June 2017.

His nearly 13-year tenure at Dolce & Gabbana was interspersed with five years at Compagnie Financière Richemont, where he served as CEO of fashion brands ranging from Dunhill to Lancel.

Asked about a possible public listing, he said it was too early to think about an exit and pointed out that L Catterton was considering a long-term project for Etro. “We are delighted and happy with the prospects,” observed Cardinali.

He is aware of the macroeconomic and political challenges, admitting that “Russia was not a negligible market” for the brand and that China was “recording triple-digit growth” while reeling from the “on and off” restrictions imposed. to curb the COVID-19 pandemic.

Cardinali is focused on expanding its business in Asia, where China is “under-penetrated”, and in America.

There are seven directly operated stores and three outlets in China, and the plan is to open 20 units with a new partner. “We also tested Tmall and the response was great – we sold 200 bags in two hours on Chinese Valentine’s Day,” he remarked, noting that digital investments are a priority in China.

Etro will also launch a new site in February and is working on developing an omnichannel platform in 2023, while continuing to develop its relationships with e-merchants from Farfetch to Yoox Net-a-porter – offerings that are helping to grow brand visibility.

He said “60% of the major investments we are planning” will be channeled into communication, content and digital channels. “The brand is healthy, but the company needed additional drive in terms of innovation, product and communication,” Cardinali said.

That momentum was reflected in Etro’s decision to get closer to the Metaverse, hosting a “Liquid Paisley” fashion show during Decentraland Fashion Week last March. “We don’t know what will happen in the future, but we saw 1,300 avatars created in three hours.” He said the company has already seen “growing interest” from younger consumers in the brand, which bodes well for its customer rejuvenation strategy.

Etro will also unveil a new store concept in February to reflect De Vincenzo’s creativity. “We are changing the customer experience and our sales ceremony,” Cardinali said. Existing and new stores will be modeled after this plan.

There are 20 directly operated stores in Korea, which is a strong market, and 50 doors in Japan.

In the United States, there are 13 stores and the region accounts for nearly 20% of sales. But Cardinali sees business “accelerating”, relying on strong brand awareness and equity. He plans new openings, but he was mum on specifics at this point.

He is also negotiating a joint venture agreement in the Middle East, another market he considers underdeveloped and with great potential. There is a store in Dubai, one in Qatar and one in Saudi Arabia.

In total and worldwide, Etro has 140 directly operated stores. In Europe, which is its biggest market, the brand is present in the main towns and streets, from Old Bond Street in London to Via Montenapoleone in Milan, so the objective is to renovate these shops.

Asked about the rising costs of energy, shipments and raw materials, Cardinali said that “from the start, coinciding with the change in governance, we started collaborating with suppliers in Italy, who adopted the project and bought the raw materials. This decision allowed us to cover structural increases for 12 to 18 months.

Producing close to home, shipments are abroad and Cardinali has reduced the packaging of shipments. “We ship less and better.”

He stressed that the turnaround is based on “growing product quality in higher positioning, so that reasonable price increases are part of the stimulus.” For example, he said he excluded all plastic zippers. “And Marco is in tune with us; he has very high expectations, working with people like Fendi.

The designer is a former winner of the Vogue Italia “Who Is on Next?” talent search, and has worked for years on accessories as a consultant for Fendi with Karl Lagerfeld and Silvia Venturini Fendi. While focusing his time on Etro, he will continue to consult Fendi.

Her eye for bold colors, labor-intensive garments, optical effects, rich fabrics and sophisticated embellishments caught Cardinali’s attention, and her experience with accessories should contribute to the category at Etro.

“Etro has all the hallmarks of a lifestyle brand,” Cardinali said.

Womenswear accounts for 65% of sales, but he touted the potential for menswear, which continues to grow, and homewear is seeing “fabulous demand”.

Cardinali is currently discussing licenses for the production and distribution of eyewear and perfumes, which were previously made in-house.

To develop Etro, Cardinali also relies on a key asset: “Our human capital – it is moving to see how this project has been fully embraced.”