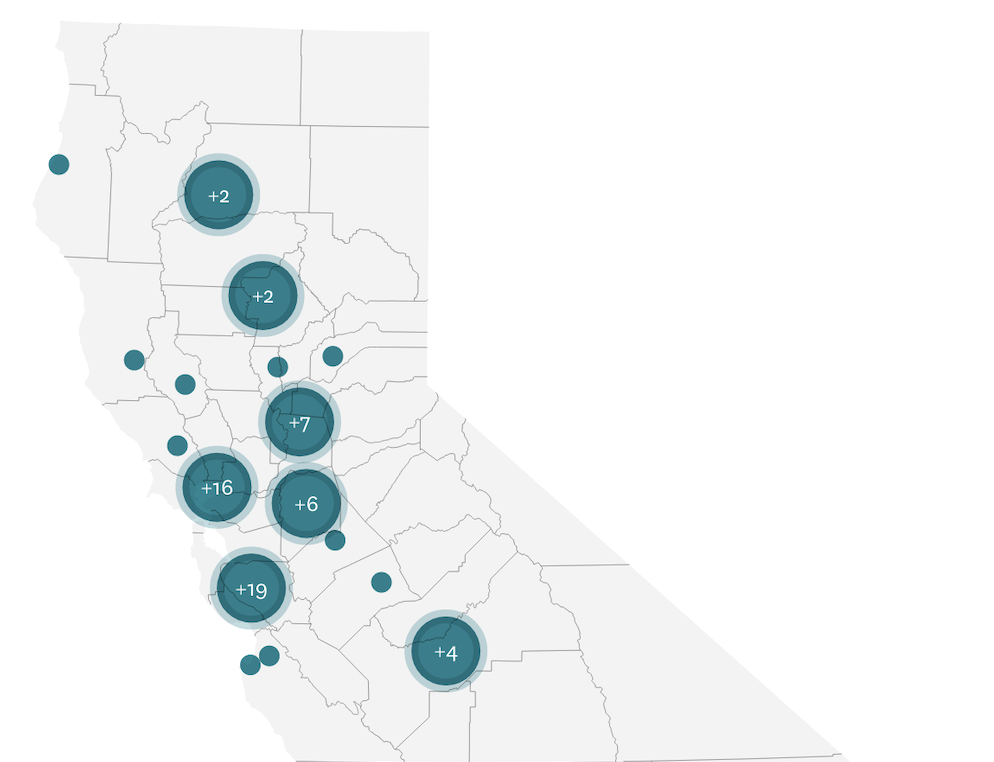 To understand the geographic distribution of abortion clinics across the state, the Chronicle obtained data from UCSF’s Advancing New Standards in Reproductive Health, or ANSIRH, program. The data includes nearly 800 clinics nationwide that were open and providing abortion services in 2021 — including 168 in California (though four are virtual or telehealth clinics with no physical location).

Stanislaus County had the fewest open abortion clinics of California counties with at least 500,000 people as of the 2020 census. The county had only one clinic for its 552,000 residents. Fresno, Kern, and San Bernardino counties also had relatively few clinics for their populations, with each county’s number being less than three clinics per million residents.

Of the major metropolitan counties, San Francisco has the most clinics per person. The city has eight within its borders, which translates to a clinics-per-population ratio of nine per million.

The Chronicle previously reported that Roe’s reversal could quickly close clinics in 26 states, which would make California home to nearly a third of all open abortion clinics nationwide within months of the ruling.

The state’s share of open clinics could grow further as it marshals the resources to become an abortion sanctuary, as decisions by Governor Newsom and the state legislator have indicated. In the run-up to the ruling, California state lawmakers introduced several bills to expand abortion access for out-of-state patients — several of which have already passed — and on Friday, Governor Gavin Newsom issued a joint statement alongside the Governors of Oregon and Washington State to affirm those states’ “commitment” to supporting access to abortion, including for people living in states that are certain or likely to prohibit the procedure.

However, it’s unclear how many more people seeking abortions California will need to support.

While previous research from the pro-choice political organization, the Guttmacher Institute, indicates that the number of women between the ages of 15 and 49 whose nearest abortion clinic is in California will soon increase thirty-fold, from 46,000 to 1.4 million, the institute’s figures indicate that the vast majority of these women would travel from Arizona, whose Governor Doug Ducey has indicated he could not enforce the pre-existing ban or state “trigger” on abortion before Roe v. Wade. Ducey instead said the state would enforce a more recent 15-week ban, which would still allow most abortions.

Susie Neilson (her) is a staff writer for the San Francisco Chronicle. Email: [email protected]