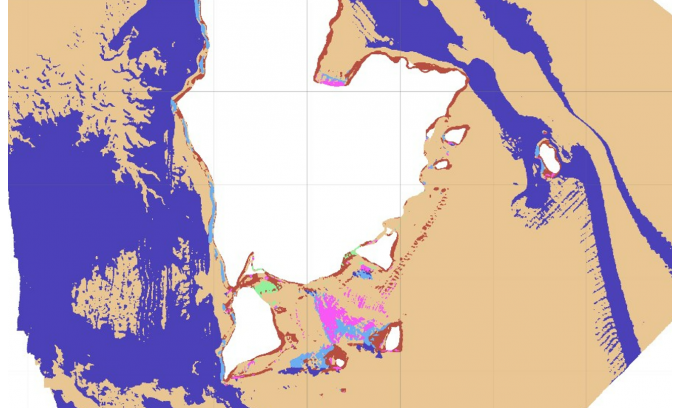 The great benefits of advancing unmanned and autonomous technology


In addition to being able to monitor water depths, newer multi-beam echo sounder (MBES) sonar systems can also simultaneously record intensities reflected from different seafloor surfaces. With this ability, it is possible to explore the variety of seabed types and then build a map of marine habitats. This case study illustrates how hydrographic data was used to create a map of the marine ecosystem of Redang Marine Park in Malaysia.

A map of any marine ecosystem can be created using habitat data that has been acquired in the field, for example through spot sampling, underwater video observations or diving activities. These maps, however, are point-based and have little value when only sample data is used. High resolution spatial data such as an MBES survey bathymetric map can be used to circumvent this problem. The advantage of hydroacoustic data from hydrographic surveys is that they are collected away from the survey vessel, providing near 100% coverage and better spatial resolution. However, marine habitats cannot be inferred based on hydrographic data alone. Previous studies have found considerable correlation between marine ecosystems and the topography of the seafloor, including its complexity or ruggedness as well as the many types of seafloor sediments and their textures. By further analyzing the bathymetry and MBES backscatter to represent habitat variabilities, these variabilities are explained. The derivation of seascape derivatives from bathymetry, such as bathymetric slope, roughness, complexity and benthic position index, as well as sediment textures and attributes from backscatter data, are examples (i.e. gray level textures, grain size and sediment class). These datasets, along with sample data, are combined with machine learning techniques to provide a map of the marine ecosystem that is spatially explicit and can be used to develop a specialized prediction model (Figure 1).

In order to collect hydroacoustic data for this study, a partnership between Universiti Teknologi Malaysia (UTM) and the National Hydrographic Center (NHC) was established. This survey could be used for regular NHC tasks such as mapping and adding to their bathymetric databases in addition to providing data for marine habitat mapping. A Kongsberg EM2040C MBES system was used to conduct the MBES survey. The survey was conducted in accordance with International Hydrographic Organization (IHO) specifications, which include calibration of patch tests, tracking of tidal fluctuations and recording of changes in the speed of sound during the survey. The final bathymetric map was created at one meter resolution after processing the raw depth data using Caris Hips and Sips software. Additional factors, such as seascape derivatives, have been created from the bathymetry to explain the variance in seafloor topography, which is crucial for the relationship with marine habitats. Backscatter mosaic (or image) and backscatter intensity as a function of angle of incidence (backscatter angle dependence) were produced using Fledermaus Geocoder Toolbox (FMGT) software after data processing raw intensity. Using the grayscale co-occurrence matrices (image texture analysis) and image enhancement approach (hue, saturation and intensity), a variety of backscatter textures were created from the mosaic of backscatter. The Angular Range Analysis (ARA) method was used to generate (1) information on sediment types and (2) sediment grain size (phi).

To produce complete habitat information, sample data alone may not be practical. Machine learning is a method to achieve the goal of habitat class prediction when direct ground truth is not available. The link between the hydroacoustic dataset and ground truth is first used in machine learning to develop a model (including seascape derivatives). The model must have enough data to differentiate the different classes of marine ecosystems; in other words, each type of maritime ecosystem has its own acoustic signature. The machine learning algorithm then identifies habitat categories based on the hydroacoustic data in the absence of direct ground truth by applying this relationship (model). Based on survey data generated by MBES mapping, the result is a spatially explicit habitat map covering the entire region. Certain ground truths have been reserved for the cartographic evaluation in order to validate this map.

The final marine habitat map of Redang Marine Park is shown in Figure 2 with a spatial resolution of one meter. The distribution of marine habitats, in particular the spatial distribution of corals and seagrasses in the region, is shown on the map (Figure 3). For such a marine park authority, estimating the size of the coral area is crucial as it will be used as a reference for future planning of conservation efforts or to study habitat changes. Seagrass beds are another important marine habitat in this region, as they provide food and shelter for sea creatures such as fish, dugongs, and sea turtles. The seagrass distribution is spatially explained by the marine habitat map, and this knowledge is crucial in determining how human activities may affect ecosystem deterioration. The map also shows the different types of sediment present in the area, including the distribution of fine and coarse sands. Instead of detailed information on individual species (e.g. different types of corals), the map provides a broad class of marine habitats, and is therefore useful for providing a comprehensive overview of the overall habitat in the area. . The Department of Fisheries can use this information to create a conservation strategy, and it is also one of the main inputs for marine spatial planning of the biodiversity region in Malaysian coastal waters.

Hydroacoustic data from hydrographic surveys are not only useful for standard mapping purposes, but can be analyzed and extended for other purposes, in line with the “collect once, use many times” philosophy. For marine habitat mapping, hydroacoustic data alone might not be sufficient, and integration with sampling data and machine learning techniques has proven useful. The method demonstrated in this study overcomes the difficulties associated with acquiring too much sample data over large areas. In order to ensure the reliability of the marine habitat maps created, the accuracy and requirements of the hydrographic survey should be as high as possible, to ensure that all marine habitat maps produced are free of artifacts and errors. . With today’s technological advancements, such as the use of unmanned survey vehicles and autonomous systems, marine habitat mapping projects can be done more cheaply and in less time and provide more detailed information. We anticipate that in the future, maps of marine habitats will be just as crucial to hydrographic authorities as navigational charts and bathymetric data.