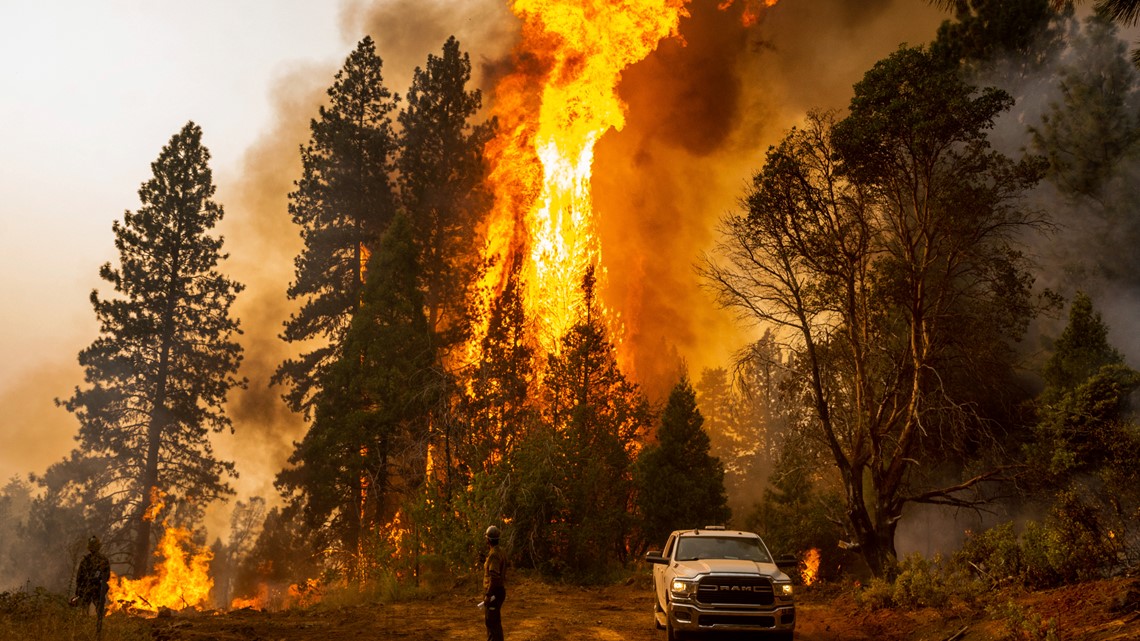 Flames from the Mosquito Fire jumped the American River, burning structures in Volcanoville and closing in on Foresthill and Georgetown.

FORESTHILL, Calif. – The fast-moving Mosquito Fire in the Sierra Nevada foothills continues to grow and threaten more than 5,000 homes, while blanketing the region in smoke.

Although lower temperatures and higher humidity kept the fire from growing quickly, erratic winds prevented firefighters from getting ahead of the flames.

“We’ve gotten some respite with some of the weather we’ve had, but the fuel conditions are still pretty volatile right now,” Ernie Villa, fire management officer for the U.S. Forest Service, said Saturday.

Cal Fire announced Saturday that the fire has burned 37,326 acres and is 0% contained. Officials say more than 11,000 people were evacuated from the area on Saturday evening.

The flames are moving north and northeast as winds increase in speed and change direction. Officials say they are now opening lines of control that were previously used in other fires to try to stop the fire from spreading.

► Scroll down for Evacuation Maps and other fire resources.

PHOTOS: Scenes from the Mosquito Fire

David Hance slept on the porch of his mother’s Foresthill mobile home when he awoke to glowing skies early Wednesday morning and was told to evacuate.

“It was actually terrifying, because they’re like, ‘Oh yeah, it’s getting closer,'” he said. “It was like a sunset in the middle of the night.”

Hance left behind most of his electronics, all of his clothes and family photos and fled to Auburn, where he was reunited with his mother, Linda Hance, who said the biggest stress was wondering: “Is my house still there?

The Mosquito Fire surpassed the Fairview Fire in size and became California’s largest blaze on Friday.

RELATED: Pyrocumulus: What It Is and How Does It Form?

RELATED: How to check the air quality where you live

The cause of the Mosquito Fire remained under investigation. Pacific Gas & Electric said unspecified “electrical activity” occurred shortly after the fire was reported on Tuesday.

El Dorado County Sheriff John D’Agostini issued a local emergency due to the fire and a public health emergency was issued for the area due to the smoke.


STAY INFORMED WITH ABC10:
► ABC10 In your inbox: Sign up now for our daily newsletter for local headlines, weather, tips and even something to put a smile on your face.

► ABC10 on demand: Access our local news, live programming and weather with the free ABC10 app for Roku and Amazon Fire TV.

This map from the National Interagency Fire Center shows fire activity (may take a few seconds to load):

For a Waze map with current road closures, click here.


SEE MORE : How crews planned to fight the fire on Friday evening: