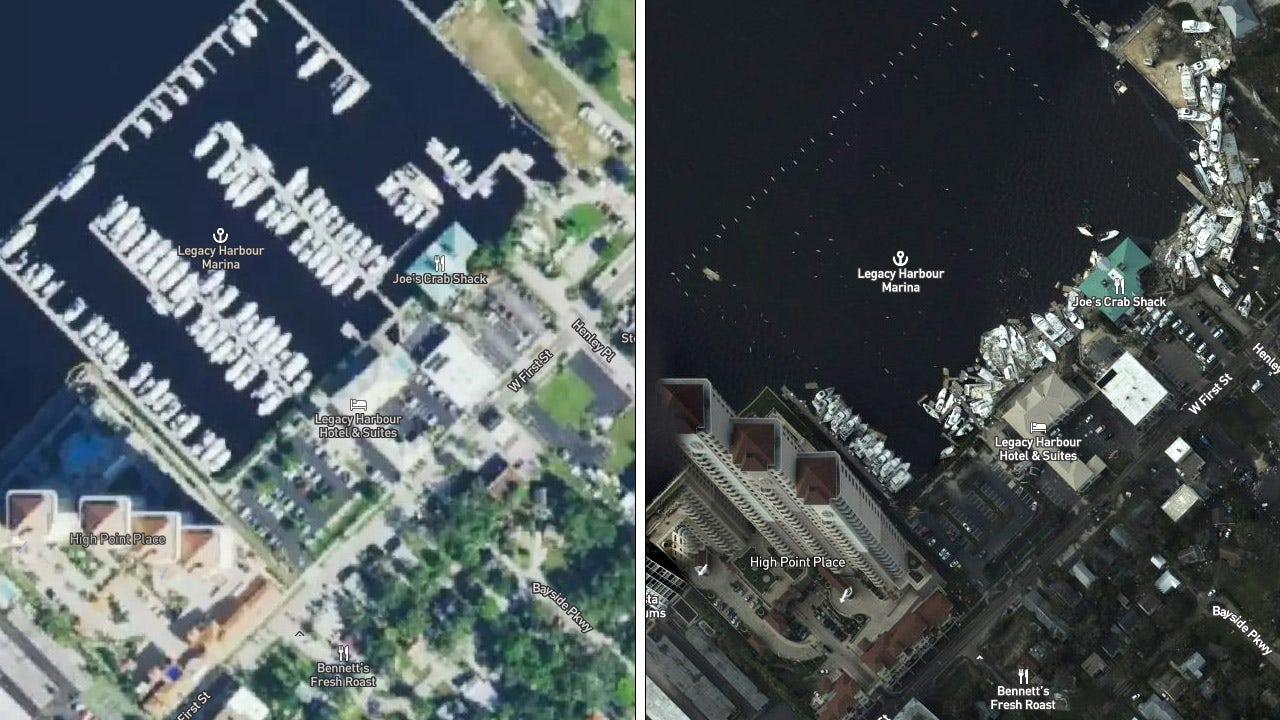 Thursday’s view of a marina in downtown Fort Myers, contrasted with a photo from before Hurricane Ian. (NOAA)

We’ve seen the chilling scenes Hurricane Ian brought to southwest Florida before, but the scale of the storm’s impact is becoming more detailed now that the federal government is releasing aerial photos taken during recent flights. of investigation.

Images displayed on an interactive map were taken by NOAA’s Remote Sensing Division “to support homeland security and emergency response needs” following the storm. The photos – taken during long sweeps by the agency’s Hawker Beechcraft King Air 350CER aircraft from Thursday – cover a 50-mile strip from Cayo Costa, where the eye of the storm made landfall, to Sanibel, then up the Caloosahatchee River to Fort Myers.

A second stretch of 15 miles covers the coast west of Cape Coral.

AFTER: The Sanibel Causeway (NOAA)

One of the most obvious features visible in the photos is the destruction of the Sanibel causeway. Two sections of the span have disappeared entirely, but the images also show that a lot of sand and debris cover what is left of the roadway.

Farther west, many resorts and homes along Captiva Island appear to be awash in sand and water, while some boats can be seen along the shore.

Photos show the Sanibel Lighthouse still standing, although it is not yet clear if it has been damaged.

Up the Caloosahatchee, the damage to Fort Myers is clear. Boats at Legacy Harbor marina were thrown ashore; the nearby City Yacht Basin fared slightly better.

AFTER: The Legacy Harbor Marina (NOAA)

NOAA says the website will be updated as more flights take place.

RELATED: The beloved bubble room on Captiva Island is still standing, according to satellite imagery, but the extent of the damage is unknown

Hurricane Ian made landfall Wednesday as a powerful Category 4 storm with winds of 150 mph and a storm surge of 12 feet. Several deaths have been blamed on the storm and rescues are still underway.

Ian has regained hurricane strength in the Atlantic and is expected to make landfall for the second time on Friday night in South Carolina.

AFTER: The Blind Pass area (NOAA)

This story was reported in Tampa, Florida.