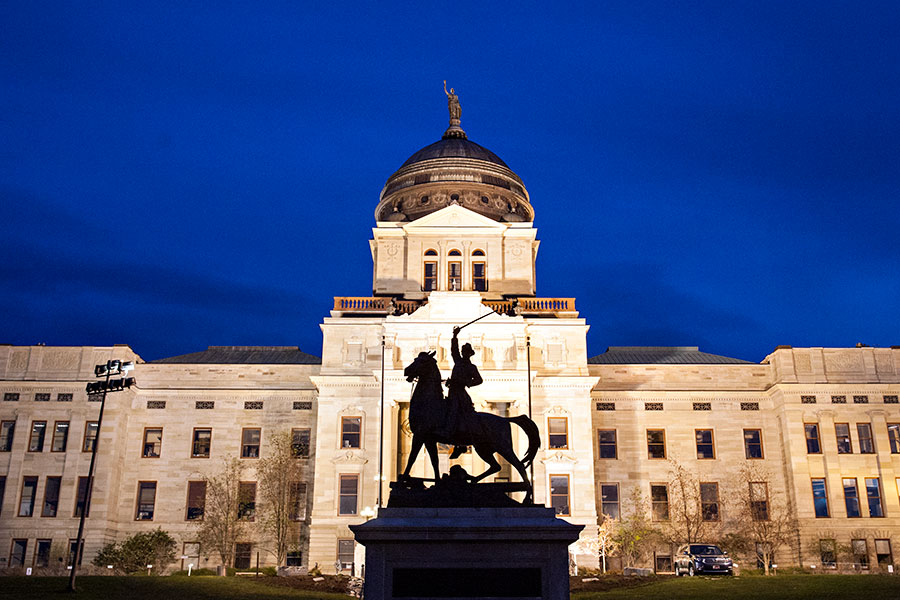 Montana District and Allocation Commission commissioners for both parties submitted their submissions for consideration on how to divide the legislative map for elections beginning in 2024.

Democratic Commissioner Kendra Miller criticized the maps presented by Republicans, saying they would unfairly favor Republican candidates in a way that would net them at least 14 additional House seats and reduce Indigenous representation in the Legislative Assembly.

Republicans on the commission pushed back against the idea that their maps were drawn to benefit their party, with Commissioner Dan Stusek giving examples of when he chose not to give his party an advantage, such as not not split Whitefish.

“The fact that you had a bit of restraint in one or two places, but still won yourself 14 more seats, is no comfort to the people of Montana who would like a legislature that reflects all Montanans,” Miller said.

The Constituency and Allocation Commission is made up of four commissioners, two chosen by Legislative Democrats and two by Legislative Republicans. The chairman of the committee is appointed by the Supreme Court of Montana.

Republican Commissioner Jeff Essmann also objected to Miller’s claim, saying a motive had been attributed to him. Essman explained how he chose to draw lines around communities like Glasgow, right next to the Fort Peck reservation.

“The city of Glasgow, which was divided for 20 years, I tried to keep intact,” he said. “I have served with Suffrage Act District representatives in all seven sessions I have served, they have done an excellent job representing their community.”

He said he never intended to deprive anyone of their rights.

Miller argued that the Republican’s intent was not at issue, but the outcome their proposed cards would bring about.

“The two Republican commissioners’ card proposals are stealing representation from Indian Country, and that is outrageous and totally unacceptable.” Not only is this a blatant attempt at partisan gerrymander, but it is patently unconstitutional,” Sen. Susan Weber, D-Browning, said in the statement. “Indigenous communities in Montana have the right to equal participation in the political process, and Republican maps do not respect that right.”

“Today the Democratic members of the Montana District and Allocation Commission tried to claim a high moral position, but in fact their hands were filthy,” said Montana Republican Party Chairman Don “K Kaltschmidt, in a statement. “It is incredibly disappointing that the Democratic members of the Commission used their positions to unfairly gain access to Republican cards before the town hall meeting. They also once again carved up our state in a desperate bid for political gain.

Democrats said they were able to do a quick analysis of the maps by preparing Excel sheets beforehand and were able to import data from Dave’s Redistricting website during the meeting.

The committee adopted Criteria for legislative districts last summer requiring districts to be “as equal in population as possible” within a 1% variance with certain exceptions there must be compliance with the Federal Voting Rights Act, districts must be functionally compact in terms of distance and in one piece.

The commission also agreed to goals for the constituency process, which serve as priorities but not requirements, which include language that no card favors any political party and that the competitiveness of the district is considered.

Essmann said the 57% to 43% advantage Republicans have is not where they need to be on the House map because that requirement is not in the Montana Constitution or the U.S. Constitution. .

“The word fair does not appear in the Montana constitution with respect to the making of these maps,” he said.

The commission voted 3-2 in favor of submitting the proposed maps for public comment, with Democrats in opposition.

Chair Maylinn Smith, the deciding vote to submit the maps for public comment, said she did not expect the maps presented on Tuesday to be the final map going forward. The final map will be submitted to the 2023 legislature.

“I recognize that there are issues with some of the cards and I’m confident these have been clearly raised and we will be receiving a lot of public comment on these issues,” Smith said.

All four maps are available online via the committee websitewith Miller sharing the card proposals both via email and on Twitter.

The committee holds nine public hearings on the maps offered, in person and on Zoom, in late August and early September.

This story originally appeared in the Daily Montanan, which can be found online at dailymontanan.com.