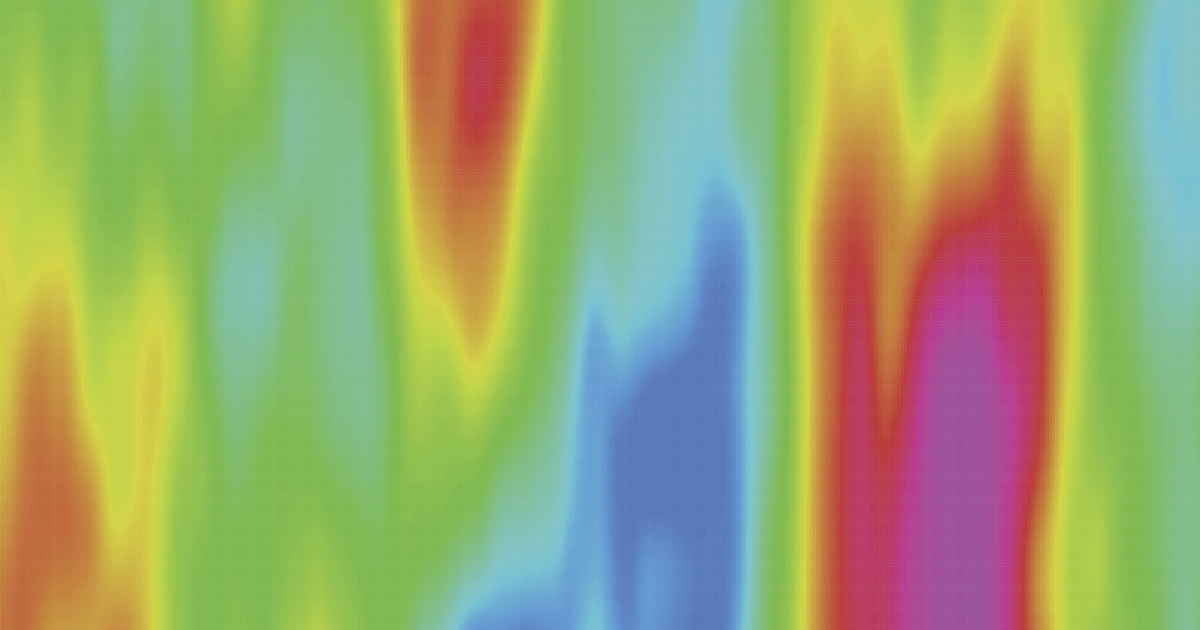 Recently, researchers demonstrated a temperature chart that can be taped to other surfaces and used to generate heat maps. What challenges do typical thermal sensing solutions present, what have researchers developed, and how might this help engineers in the future?

Thermal sensors are arguably one of the most common in electronic devices, and the reason for this may be the simplicity of thermal sensing. For example, a thermal couple is a combination of two different materials which, when brought into contact, will generate a voltage as a function of temperature. Such thermal couples are extremely easy to manufacture and, as such, inexpensive to integrate.

An even simpler option is to use a comparator with a pair of matched transistors with two separate constant current sources. With each paired transistor, some basic logarithmic calculations will create a relationship between the two temperatures that is entirely temperature dependent, which is commonly used in microcontrollers.

For example, identifying a hot spot in a design can be helpful in determining potential shorts or damage. A design with twenty scattered thermal couples can provide localized data, but trying to read each sensor requires many analog lines, all of which must be routed to a central controller.

One option is to use an infrared camera that can observe the entire design. However, accurate IR cameras are usually very expensive, and those with high frame rates are subject to strict controls due to their potential military use. At the same time, such a camera is heavy, bulky and needs to be positioned away from the main design. As such, infrared cameras are good for debugging at workbenches but cannot be used for general observation during normal operation.

Recognizing the challenges faced by current thermal sensors, researchers recently demonstrated a thermal sensing device that is embedded in a flexible substrate. A demo of the thermal sensor showed a matrix of 10×10 thermal couples to give a total of 100 sensors, and their matrix configuration allows the entire sensor to be controlled with only 20 control lines (10 row selects and 10 column selects ). Powering the demonstration with a Raspberry Pi, two ADG706 multiplexers, and a SparkFun LCA HX711 load cell, the researchers demonstrated how their flexible sensor array can be used to generate heat maps of the area in contact with the substrate.

To create the sensor, the researchers combined a pair of PET substrates with conductive traces of silver that then sandwiched a layer of PEDOT:PSS. The resulting combination creates temperature junctions that can be individually selected for reading. At the same time, the use of a PET substrate provides flexibility that also has potential applications in body-worn sensors and other wearable devices.

Additionally, the researchers created additional sensors to demonstrate the variability in overall sensor size and density. An example showed a sensor with a total area of ​​only 1 cm2 and a total number of sensors of 441 (21×21).

Using the sensors, the researchers were able to demonstrate heat maps generated after exposure to heat in specific areas. The resulting heatmaps not only show heat changes, but also how that heat moves through the network in real time.

How can temperature matrices help engineers in the future?

One of the main applications of these sensors is monitoring heat distribution in a design, whether it is a circuit board, battery pack, or motor housing. The ability to see hot spots allows engineers to isolate potential areas of concern while allowing engineers to understand how heat moves throughout their design. At the same time, such a thermal sensor can track all zones for heat changes, allowing all aspects of a design to be monitored (not just specific zones with built-in thermal couples).

Another potential application for such thermal array sensors is patient health monitoring. While the human maintains a stable core temperature, injuries, infections, and disease can see changes in heat distribution throughout the human body. For example, an infected cut will often see increased blood flow (a typical immune system response) and, therefore, is warmer than surrounding tissue. If attached to key areas of a patient, doctors can track localized temperature to understand areas of concern (such as returning infection).