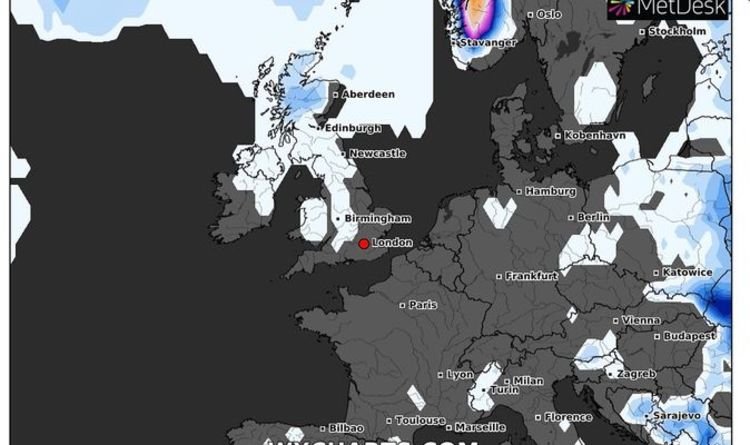 Snow forecasts from WXCharts show that Britain could be covered in a blanket of snow later this month as a wave of cold air is expected to sweep across Europe. According to the maps, an icy front is expected to arrive on Wednesday January 19 and could persist for at least a week.

As of midday on Wednesday the 19th, charts show freezing conditions could bring snowfall to northern Scotland before spreading south.

By Thursday January 20 there could be some snow remaining in northern Scotland, particularly in the west.

This will persist in parts of the north, including Inverness, until Friday January 21.

In England, snow may also remain in northern areas such as Cumbria and Northumbria until Friday.

However, it should have cleared into other areas as the cold front moves across the North Sea.

The charts also showed that a second flurry of snow will hit the country by Thursday January 27 around 6am.

The north of Scotland is most likely to experience snow, followed by the northeast of England.

Snow is less likely in South Wales and South England.

However, regarding this week, forecasters said no snow was expected despite temperatures reaching a low of -5C according to the Met Office.

Renee Duff, meteorologist at Accuweather, told Express.co.uk: “For Thursday evening dry weather is expected across the UK and temperatures will drop to around 2°C in London, 1°C in Birmingham and -3C in Oxford.

“Wind speeds will generally be light across the region, blowing no more than 5 mph (8 km/h), but for much of the night the wind will be light and variable.

“There will be a chance of fog and drizzle overnight, generally west of London towards Oxford, Bath and Cardiff and north to west of Birmingham.

“Where fog develops, motorists should exercise caution on roadways as visibility will be very poor.

“In addition, some fog will form where temperatures are near or below 0°C, which could create isolated slippery patches on road surfaces.

“No snow is expected next week, at least, as an area of ​​high pressure will keep the weather in check and keep conditions dry.

“It’s been a mild start to 2022 for much of the region, and it looks like temperatures will be on an upward and downward trend through next week.”

Met Office press officer Oliver Claydon told Express.co.uk: ‘Tonight’s lows are expected to reach -5C across rural central England and Wales with a widespread frost in the southern half of the UK.

“In terms of wind there is little wind to speak of for most of the night tonight as the high pressure keeps conditions very stable except for the far north of Scotland where it could there will be gusts of up to 40 mph this evening before the winds subside overnight. .

“The only precipitation forecast is light rain in the far north of Scotland, where it’s too mild to fall as snow, everywhere else it’s dry with mostly clear skies overnight.”