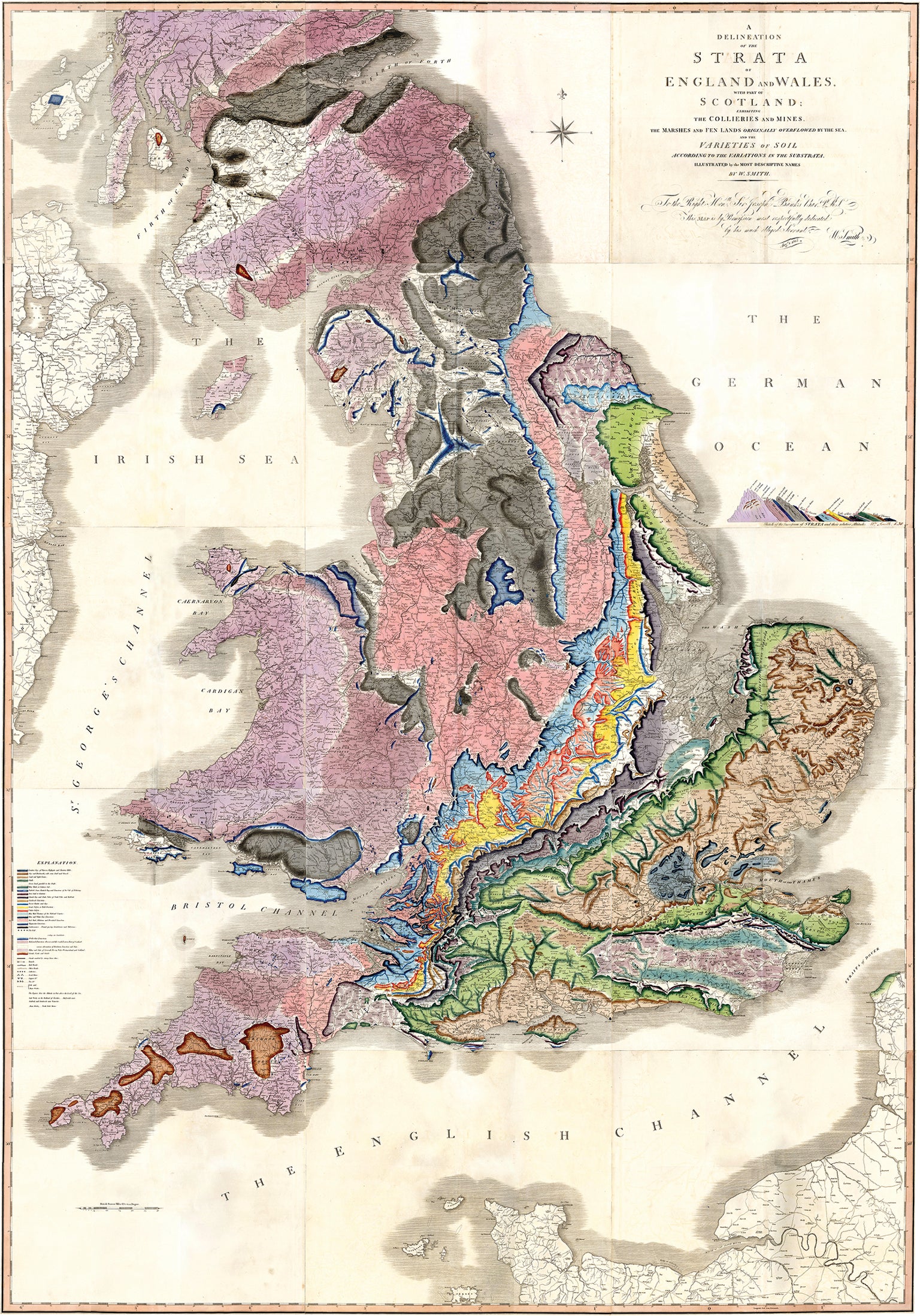 The first maps of geological strata, a documentary by Oliver Sacks and a new scientific podcast

Strata are the horizontal banded layers of minerals and sediments that underlie the topography of all of the earth’s land masses and have been exposed by erosion over hundreds of millions of years. Although the practice of mapping geological strata began in the mid-17th century, the science of strata formation was still in its infancy. In the late 1700s, self-taught land surveyor William Smith brought a new breadth and perspective to the study in his work for a mining and prospecting company. Captured in the many maps and sketches in this astonishing collection, the fossils that he systematically marked on particular geological strata paved the way for a more holistic view of geology that has enabled other researchers and industrialists to predict the geological composition of large regions. Perhaps the highlight of this pioneering work was Smith’s Technicolor map of the geological deposits of Great Britain, which he labeled with the colloquial names used by miners and quarrymen of the time: Red Marl colored in peach pink, London Clay in sky gray, Chalk in chartreuse. Smith was known to take long, early morning “walks” with a hammer and a notebook in hand, soaking up the history of the planet where so many had just passed.

“Are there other species or are we an anomaly, something special?” Asks reporter Krantz at the opening of the second 10-episode season of her podcast. She interviews scientists involved in SETI – the search for extraterrestrial intelligence – and astronomers who recently observed the first known asteroid beyond the solar system. She also chats with US Navy pilots who claim to have seen UFOs and people who believe they have encountered aliens and travel to the Colorado UFO Watchtower, a popular spot for those hoping to spot a unidentified flying object. Through vivid stories and engaging interviews, Krantz explores the science of how we might discover a new species. It also probes the philosophical questions raised by research and the cultural reasons that fascinate us: â€œWhat does it mean if we find something? And what does it mean if we don’t? “-Clara Moskowitz

Oliver Bags: His own life
Documentary directed by Ric Burns. Opening date: September 23, 2020
Check out the screenings at https://bit.ly/SeeOliverSacks

Oliver Sacks was a painfully shy child who felt distressed after a brother developed schizophrenia and his mother called him an â€œabominationâ€ when she found out he was gay. Fleeing to America for a medical residency, the London native indulged in prodigious amphetamine use and wondered on New Years Eve if he would live another year. Burns ‘documentary, made shortly before Sacks’ death from cancer in 2015, traces the flourishing of a brilliant but troubled stranger as he elevated patient stories into a literary art form by asking the same question over and over: what does it feel like to be you? Sacks asked this question to people with autism, migraines, Gilles de la Tourette syndrome, agnosia. One measure of his legacy comes from an anecdote noting that 70 percent of applicants for neurology residencies at Columbia University School of Medicine cite Sacks as a reason for wanting to choose this specialty. –Gary Stix