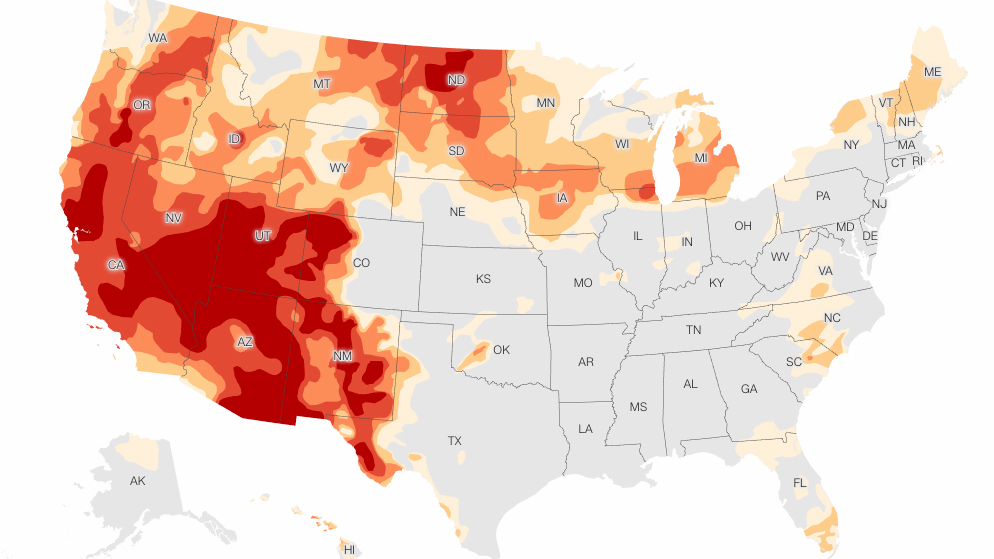 The historic drought of the West in 3 maps

Vast swathes of the West are experiencing historic and relentless drought, the region’s worst in at least 20 years.

Climate change plays a key role in these worsening crises: drought and extreme heat fuel forest fires; Reduced snowpack and lack of substantial rainfall exacerbate the water needs of millions of people, as well as agriculture, ecosystems and deteriorating infrastructure.

In addition to mandatory water restrictions already in place, even tougher cuts are looming amid drought in some states as water levels plummet along the Colorado River.

Over 25 percent of the West is in exceptional drought, which is the most severe category used by the US Drought Monitor.

The West has already seen a significant heat wave this summer, and more are expected in the coming months. Scientists say drought and heat are part of a vicious climate change feedback loop: hot weather leads to drought, drought leads to hot weather and so on.

“Climate change is putting the weather dice against us,” Katharine Hayhoe, climate researcher and chief scientist at Nature Conservancy, told CNN. “We are always at risk of extreme heat, especially in the summer: but as the world gets warmer, we find that summer heat waves arrive earlier, last longer, and get hotter and more intense. “

As the planet warms, drought and extreme heat will also fuel deadly wildfires. Many studies have linked increased carbon dioxide emissions to high temperatures and increased area burned in the West, especially California.

The West has experienced extremely low precipitation and snowfall over the past year, made worse by extremely high temperatures. Decreased rains and increased heat waves have directly led to drought conditions and water shortages.

As climate change accelerates and winter temperatures rise, snowfall will decrease. The high elevation snowpack serves as a natural reservoir that alleviates drought, storing water during the winter months and slowly releasing it during the spring melt season.

Flow, a measure of the amount of water carried by rivers and streams, is another important indicator of drought and its impact.

As drought conditions worsened in 2021, hundreds of streams and rivers are experiencing below-average flow. More than 50 percent of monitoring stations in the west reported lower than usual flows.

Changes in stream flow affect the supply of water for our own municipal use, crop irrigation, and power generation.