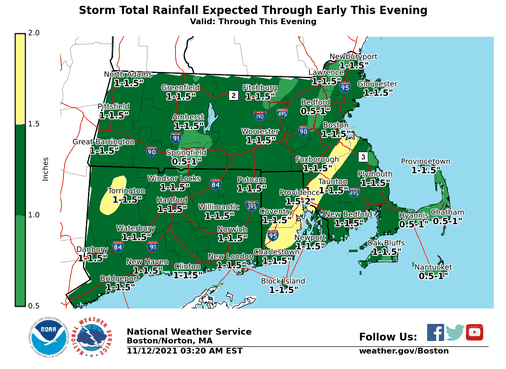 These maps show what to expect from Friday’s storm

Grab your umbrellas: a brief storm is heading towards Massachusetts.

A cold front crossing the state will bring heavy rain, gusty winds and the possibility of a few thunderstorms for a period of 2-4 hours on Friday, forecasters said.

The system was lingering over the Hudson River Valley in eastern New York City at 11 a.m. before it was scheduled to move into Massachusetts, said Torry Gaucher, a meteorologist with the National Weather Service.

Winds will be strongest in eastern Massachusetts, where a wind advisory is in effect until 7 p.m. for coastal areas of the state and Rhode Island. The notice stretches from the New Hampshire border to the North Coast, as well as the South Coast, Cape Cod and the Islands. It does not include Boston.

Due to the winds, “tree branches could be felled and power outages could result,” forecasters said.

Gusts between 40 and 50 miles per hour are expected in areas where a wind advisory is in effect, but forecasters have said they anticipate gusts of 35 to 45 miles per hour for most of the region.

Although significant flooding is not expected, there is a risk of flooding streets in low-lying areas with poor drainage when winds lift leaves and debris.

Forecasters typically expect 1 inch to 1.5 inches of rain throughout the storm.

Local quantities could be closer to 2 inches if an isolated thunderstorm arrives. There is a higher risk of a thunderstorm south of Mass. Pike, but the overall odds are low, Gaucher said.

The heaviest rain is expected to arrive in Boston between 4 and 6 p.m., Gaucher said.

The cold front is expected to clear the Massachusetts coast around 6 or 7 p.m., Gaucher said, but the possibility of scattered showers remains for the Cape and the Islands throughout the evening.