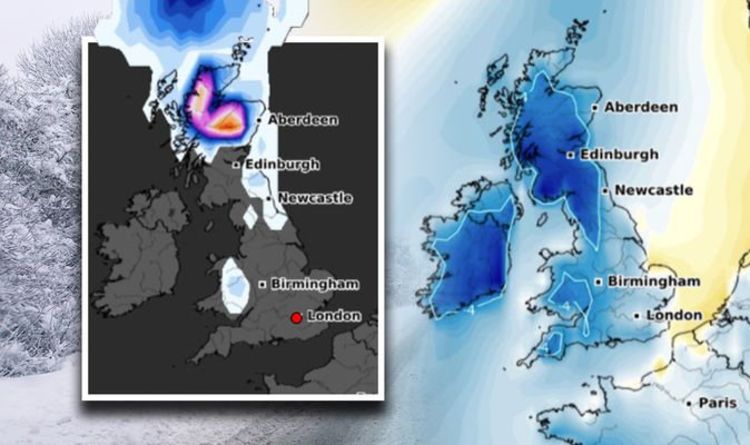 The first flurries of snow can be eagerly awaited by children, but they can be catastrophic for those looking to commute to work on snow-covered roads. Here is the latest snow forecast for UK, according to weather maps.

The UK has seen extreme weather this year, from flash floods in London to an ‘Indian summer’ in October, could snow showers be felt across the UK soon?

Despite warnings from the Met Office that Britain could be hit by a ‘White Halloween’, many Britons will have to wait until later this year for their first snowfall.

It can be difficult to accurately forecast snow too far in advance, but the latest weather maps show the Brits could have to grapple with snow conditions as early as November 3.

The latest weather maps show there is a risk of snowfall on November 3, 4 and 16, but is your area affected?

On November 1, according to Netweather, only part of the UK has a risk of snow.

Cairngorms National Park in Scotland could see snow flurries in the highlands.

On November 3, Cairngorms National Park in Scotland could see snow flurries in the highlands, according to Netweather,

Other areas could be prone to snowfall on November 4, according to maps from WXCharts,

Snow is more likely to fall in Scotland from Aberdeen.

But there is also a small chance that snow will fall in the North East of England and across Wales on November 4th.

Those hoping for more snow showers will have to wait until November 16.

Netweather’s latest forecast calls for snow to fall in northern Scotland on November 16.

What is a white Christmas?

As defined by the Met Office, a White Christmas occurs when a snowflake has been observed falling within 24 hours of December 25 somewhere in the UK.

Traditionally, the Met Office has used a single location in the UK to define a White Christmas.

It used to be the Met Office building in London, but today the number of locations has increased and can now include sites such as Buckingham Palace, Belfast, Aberdeen, Edinburgh, Coronation Street in Manchester and the Millennium Stadium in Cardiff .