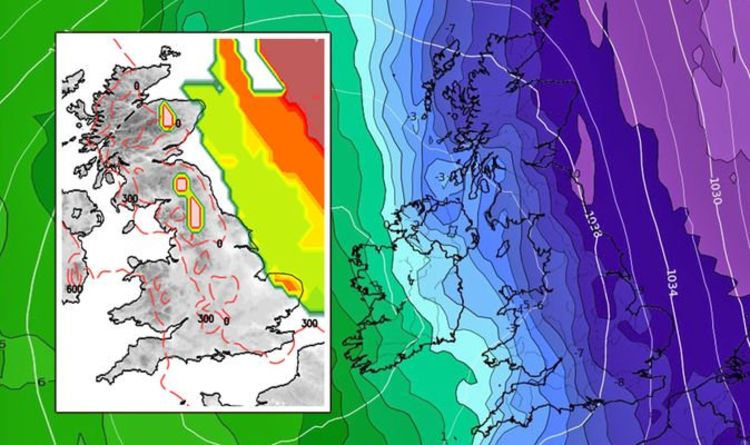 After a mostly calm January with high pressure and sunny skies, this week sees a change in pressure bringing snow and rain to coastal regions, with colder temperatures and winds across much of the country. . Maps and charts show that from Wednesday conditions start to worsen, with a Scandinavian weather front affecting western Britain.

WXCharts charts held on Wednesday will begin with wet spells across much of Scotland and northern England before moving into the Midlands and Wales.

Rainfall is expected to be light, at 1mm per hour, with winds gusting up to 50mph at 9am Wednesday.

Midweek temperatures are forecast to be high with 1C across much of Britain by 6am, warming up to 6C in the evening.

However, as Wednesday draws to a close, a pressure system is seeing snow and rain begin to form in the west of Britain, with parts of the west coast such as Norwich seeing rain at midnight.

The UK is set to be battered by the western snow front this week (Image: WXCHARTS/NETWEATHER)

Wednesday will start with wet spells across much of Scotland and northern England (Image: WXCHARTS)

Thursday and the weather system building up on the west coast begins to push east across the UK, bringing snow and freezing temperatures.

At 9am, 1cm of snow will fall an hour over Norwich and Hull, while the mercury sits at 0C for much of England and Wales.

In the north and parts of Scotland on Thursday morning it could reach temperatures as cold as -3C, before rising to 0C by midday.

Due to colder temperatures, fog and overnight frosts are likely in these areas.

WXCharts then sees conditions stabilizing heading into the weekend, with snow remaining on the ground throughout the week.

Conditions stabilize heading into the weekend, with snow on the ground (Image: WXCHARTS)

He said: ‘After a bright and cold start to the south of England with a few local patches of fog, obscuring from the northwest with light scattered rain around lunchtime, before clearing from the south to sunnier conditions already across the north, as the wind shifts to the northwest.

“Most parts dry and sunny in the afternoon, but with a cold wind, with the colder air scooping in the north, winter showers will push south into northern Scotland and later into the north east of England. Temperatures reaching 5-8C in the north, 7-10C in the south.

“A cold start with widespread frost on Thursday leading to a chilly day, with a brisk north to east wind, which will fuel wintry showers along the eastern coasts for some time.

“Most places however will be dry and sunny, with high pressures near the west. Temperatures reaching 4-5C best in the east, 6-8C in the west.

For the weekend, Mr Finnis noted that high pressure would begin to build again for Britain, which means sunny days.

He added: “High pressure is rising in the east across the UK on Friday so for the most part it will be dry and less cold, sunny best across England and Wales, cloudier for Scotland and Northern Ireland with the Atlantic flow.”

Jim Dale, senior meteorologist at British Weather Services, also told Express.co.uk: “As we approach the end of the month – the coldest parts on average of the year – what we are seeing is is the high pressure moving away south and west, letting in an air current from the northeast.

“It could well start bringing snow events towards the later stages of the month – so the last week of January. I’m talking January 25-28 now.”

The Met Office has issued a yellow weather warning for fog on the south coast (Picture: MET OFFICE)

It comes as the Met Office issued a yellow weather warning for fog on the south coast.

The warning is in effect from 5 p.m. Tuesday to 6 a.m. Wednesday and reads: ‘The fog persisted in places through Tuesday and is expected to thicken here Tuesday evening and form in other areas.

“The fog will probably be dense with visibility sometimes less than 100 m. The fog will persist for many nights before dissipating from the northwest early Wednesday morning.

Speaking of the warning, Met Office forecaster Craig Snell said: ‘The fog will be more widespread in the south and east of England, the Midlands and east Wales as well.

“There won’t be fog everywhere in this warning, but the main message to drivers is to allow a little extra time for your journey as it could be foggy.

“It could have a ripple effect on public transport, so there could be delays in bus journeys and train journeys. The fog will tend to dissipate as the morning progresses.

“It may persist in a few spots, but around lunchtime conditions should be much better.”