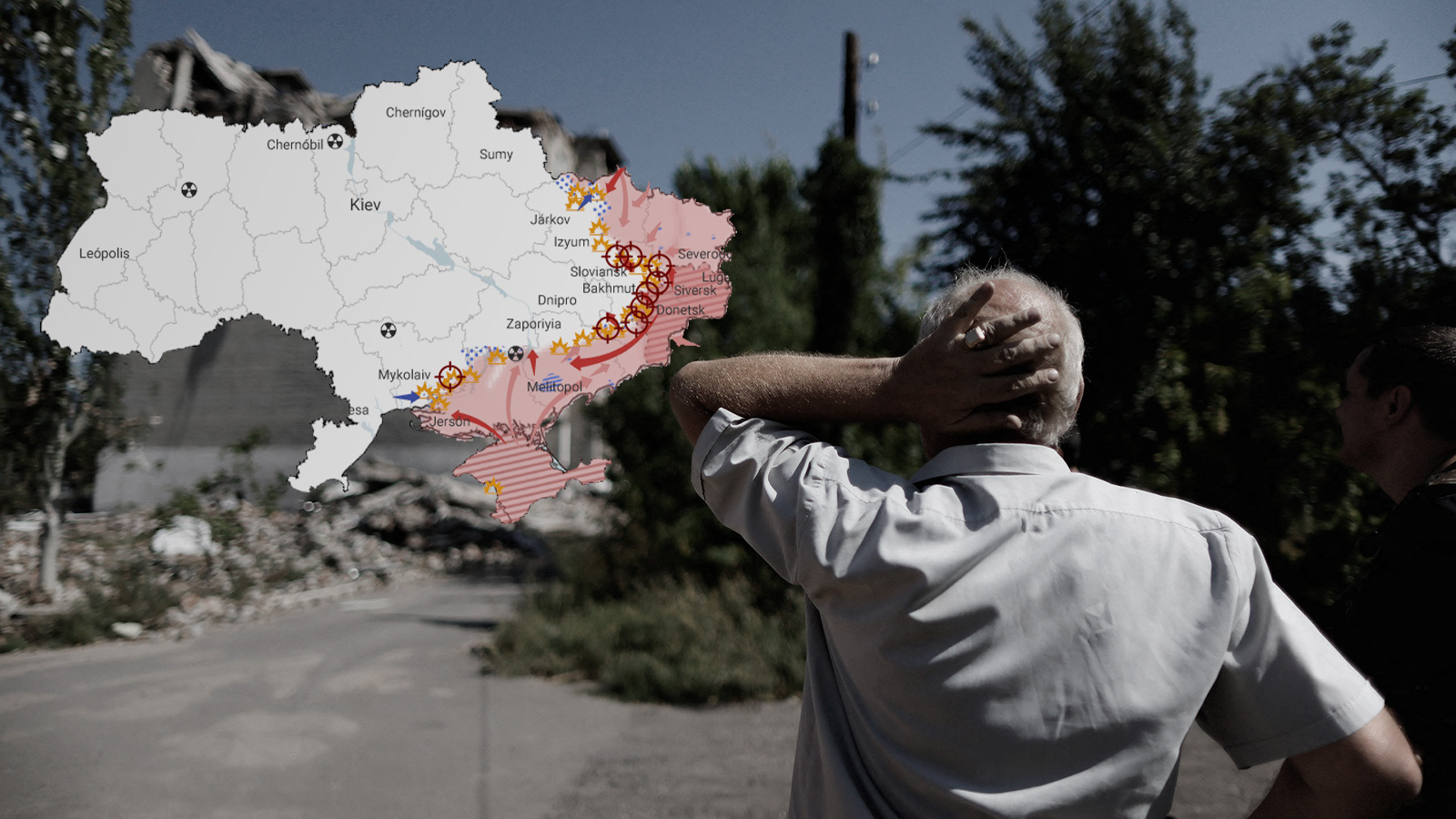 ⏳ This news is regularly updated with the latest information available. To learn more about its manufacture, consult the methodology.

Today, day 185 of the war: Russia conducts ground attacks in Izyum and Donetsk

Russian forces carried out “limited” ground attacks southwest of Izyum, northeast and south of Bakhmut, and on the northwest outskirts of the city of Donetsk, according to the Institute for the Study of War (ISW), in your daily report.

The Ukrainian army, for its part, continued to attack Russian land lines of communication and military infrastructure in Kherson Oblast that supports operations on the west bank of the Dnieper, the US think tank adds.

In Zaporizhia, concern about the nuclear power plant persists. Ukrainian President Volodímir Zelenski assured that the situation was “dangerous” and “risky” and urged the International Atomic Energy Agency (IAEA) to go there “as soon as possible” to avoid problems such as that the recent disconnection for hours. from the power station to the electrical network.

Friday August 26, Day 184 of the war: Russia claims to be ‘deliberately slowing down’ the war as bombings continue

Russia has admitted to being the author of the attack against a train station in the city of Chaplínin Dnipropetrovsk, which killed 25 people last Wednesday during the celebration of Ukraine’s Independence Day.

The same day, russian minister of defenseSergei Shoigu, told the Shanghai Cooperation Organization – made up of the leaders of China, Russia, Kazakhstan, Kyrgyzstan, Tajikistan and Uzbekistan – that “he was deliberately slowing down the pace of his campaign military in Ukraine, pushed by the need to reduce civilian casualties“, according to the daily report of the british intelligence.

Russian offensives continue in Sloviansk, Bakhmut, Donetsk and in the Kharkov region. This is reported by the Institute for the Study of War (ISW), which also points out that attacks between the two camps persist in Kherson: Russia is trying to seize the northwest of the area while the Ukrainian resistance continues to attack Russian military means and land communication routes.

In Zaporizhiathe last two operating reactors of the nuclear power plant were disconnected from the electricity grid after registration several fires nearby, and which damaged the lines that connect the great infrastructure to the network. In the last hours, the electricity was recovered.

Thursday August 25, day 183 of the war: Russia strengthens its military presence in the Zaporizhia power plant

Despite the celebration of Independence Day – with the surprise visit of British Prime Minister Boris Johnson – the bombardments continued for another day on Ukrainian soil. The country’s president, Volodymyr Zelensky, accused Russia of kill at least 25 people and injure fifty during a missile attack on a train station in the Dnipropetrovsk region.

The Institute for the Study of War (ISW) also reports Russian offensives in Izyum, Bakhmut, Donetsk and the Kherson region. In this region, as in Zaporizhia, Ukrainian forces continue to cut Kremlin communications.

The british intelligence indicates that Russia has maintained “a heightened military presence” at the Zaporizhia nuclear power plant in recent days, with the deployment of armored vehicles around reactor number five. The UK Ministry of Defense says Russian troops are aware of the risks of operating in close proximity, such as disruption of cooling systems, damage to energy supplies or operator error, who are working under pressure.

On February 24, the Russian invasion of Ukraine began with airstrikes and ground offensives. During the 26th week of the war, August 18-25, Ukraine’s Independence Day was celebrated, which led to an attack on a train station in Dnipro and left 25 dead and more than fifty fires. The Zaporizhia plant continues to be a source of international concern, with several fires reported in the region.

In the following link you can view this week’s conflict log and access those from previous weeks.

The situation in Ukraine is constantly changing, but the flow of information is not constant. Therefore, this article is not intended to be exhaustive, but rather to provide a general overview of the attacks. Past events may continue to appear on the cards and others may take time to reflect.

There is a methodological debate that assigning entire geographical areas to the control of Russian troops may imply that there is no resistance or counterattacks from the Ukrainian Armed Forces. However, these maps seek to visualize the areas in which the advances and maneuvers of Russian troops are taking place, take a standard military approach daily recording the movements of conventional maneuver warfare like the one Russia is waging in Ukraine. This monitoring of maneuvers and tactics is essential for understanding and evaluating the evolution of the war.

Information on the advance of Russian troops comes from reports from the Institute for the Study of War (ISW) in Washington as well as from the Critical Threats project. Its daily updates show which parts of Ukraine are under Russian control, understanding “control” as influence over an area against an enemy. In this sense, the colored areas do not imply the complete elimination of local resistance.

To supplement the information, updates from the UK Ministry of Defense and the Ministry of Foreign Affairs of Ukraine are used, as well as data, videos and photographs provided by news agencies, media international and other reliable sources of information reviewed by the DataRTVE team.

I tried to give all kinds of news to y’all latest news today 2022 through this site and you will like all this news very much because all the news that we always give in this news is always there. It’s on a trending topic and regardless of the latest news

it was always our effort to reach you that you continue to get the Electricity News, Degree News, Donation News, Bitcoin News, Trade News, Real Estate News, Gaming News, Trending News, Digital Marketing, Telecom News, Beauty News, Banking News, Travel News, Health New, Cryptocurrency News, Claims News the latest news and you always keep getting the news information for free through us and also tell people. Give that any information related to other types of news will be

All this news I made and shared for you, you will like it very much and we keep bringing you topics like every time so you keep getting hot news like trending topics and you It’s our goal to be able to have

all kinds of news without going through us so that we can reach you the latest and best news for free so that you can go further by getting the information of this news with you. Later we will continue

to provide information on more world news update today kinds of breaking news through postings on our website so that you will always keep moving forward in this news and whatever kind of information will be there, it will definitely be passed on to you.

All this news that I have brought to you or will be the most different and best news that you will not get anywhere, as well as the information Trending News, Latest News, Health News, Science News, Sports News, Entertainment News, Technology News, Business News, World News of this made available to you all so that you are always connected with the news, stay ahead of the game and continue to today’s news all types of news for free till today so you can get the news by getting it. Always take two steps forward

This Little-Known Gesture Will Change the Way You Use Maps on Your iPhone « iOS & iPhone :: Gadget Hacks