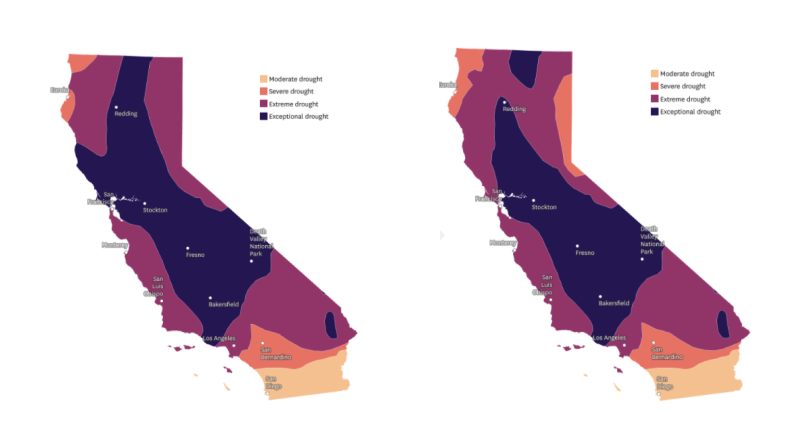 Before the rains, about 46% of California’s land was subject to “exceptional” drought – the most severe category of drought, according to data from the United States Drought Monitor, which is a partnership between the National Drought Mitigation Center, the US Department of Agriculture, and the National Oceanic and Atmospheric Administration. This week’s data released on Thursday shows that figure has fallen to around 39%.

“Some daily precipitation records were broken on October 24 in northern California,” this week’s Drought Monitor report Noted. â€œThe precipitation improved conditions in the short term, especially in the west, with soil moisture, stream flow and a period of one to six months. Standardized precipitation index indicators slipping into wet categories, â€he also said.

The drought monitor data map below shows which parts of the state have moved to less severe drought conditions since last week.

Large parts of Marin and Sonoma counties have gone from exceptional to “extreme” drought conditions. These conditions are calculated based on a variety of data points, including precipitation, soil moisture, and temperature. Although it sounds equally alarming, “extreme” is a less severe classification than “exceptional”. Some impacts associated with regions experiencing exceptional drought include increased fires, poor air quality and widespread water shortages, according to the United States Drought Monitor.

Last weekend’s downpour made a visible difference, but much of California is still experiencing drought. About 83% still fall into the extreme or exceptional categories, which is an improvement from 87% last week, but nowhere near the 34% at the start of this year.

The seasonal drought outlook from the NOAA Climate Prediction Center says that as the western United States enters a wetter season, drought conditions may continue to improve. Over the next few days, the Bay Area is expected to see more rain, but not as much as last weekend.