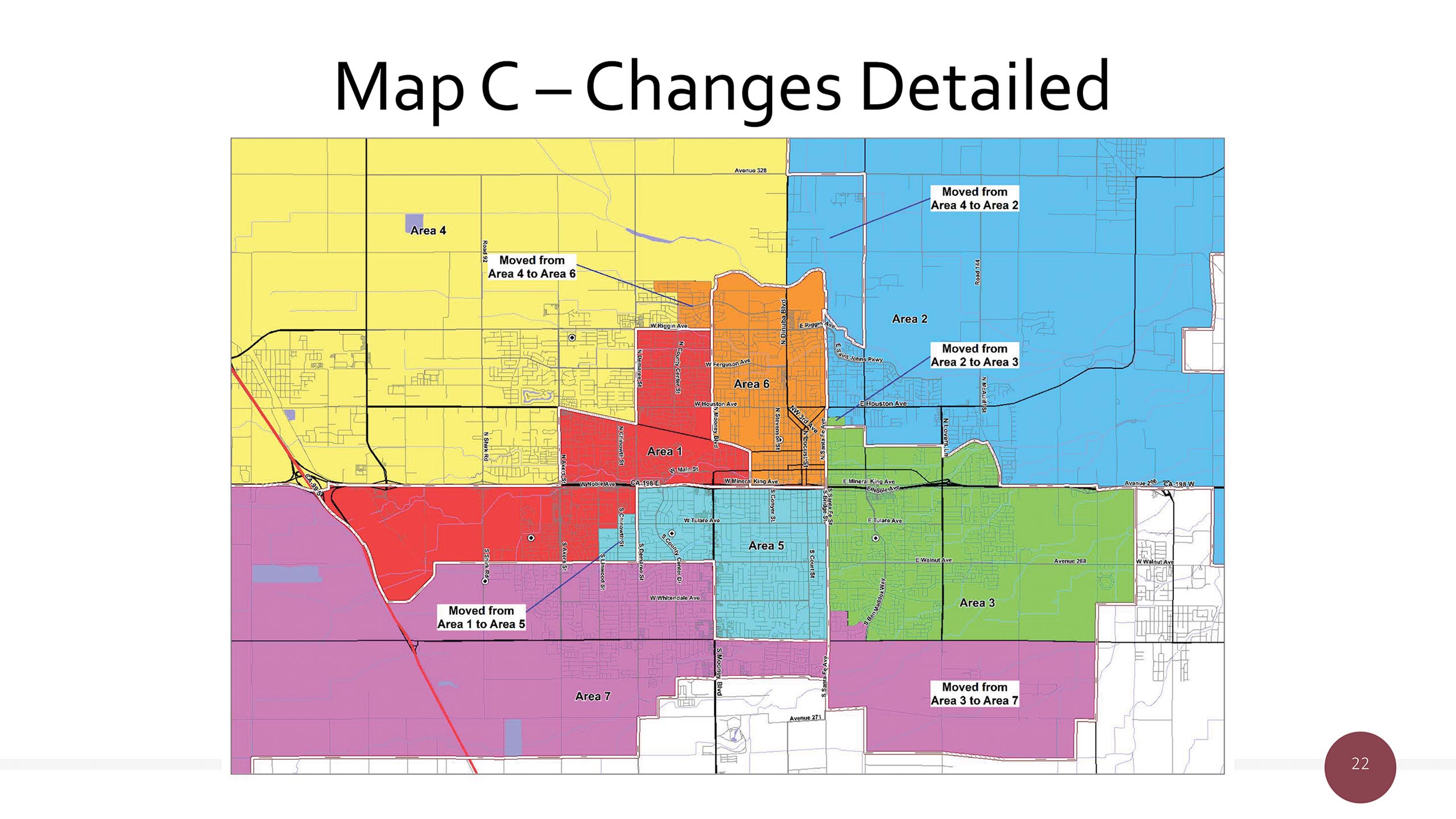 Ken Reynolds, demographer at SchoolWorks Consulting, said cities and counties are required to comply with both the federal Voting Rights Act, which prohibits gerrymandering or packaging minorities to dilute their voting power , and to the California Fair Maps Act, which requires boards to consider social data to create majority-minority constituencies. However, Reynolds said the Fair Maps Act did not apply to school districts, meaning the five maps presented to the board were maps that met all legal requirements.

Maile Melkonian, who presented Map D, said Hispanics are a protected class under federal law, so the district should create as many majority-minority districts as possible while balancing the population. She said her map created two “strong” minority majority districts with at least 55% of the Hispanic voting-age population (H-CVAP) in Zones 2 and 6, which is more in line with the spirit of the voting laws.

“It would seem, based on our population which is 44% Hispanic, that there should be two H-CVAP districts,” or more than a quarter of the vote on the council, Melkonian said.

Council Clerk Walta Gamoian wasted no time in bringing a motion to approve a map and suggested Map C. Similar to the other two maps created by the consultant, Map C created only one strong minority district in Zone 6, with an H-CVAP of 66%. Map C was seconded by admin Catalina Blair as it was the map with the least population gap between the largest and smallest admin areas at less than 1%, well below l maximum allowed deviation of 10%.

Administrator Megan Casebeer Soleno said she was fine with map C or B, but leaned toward C because it created stronger H-CVAP areas. Admin Randy Villegas said he leaned towards Map B because it had four of seven zones with at least 40% H-CVAP and three others just below 40%, but still only created one. district H-CVAP greater than 55%.

The motion for Map C was unanimously approved by a 7-0 vote, but Board Chairman Juan Guerrero, Administrator Joy Naylor, and Villagas all made comments that they preferred Map B while voting in favor of C.

The only member of the public to speak on the board’s decision to approve a card was Del Simons. She said there didn’t seem to be enough discussion in the council about which map each council member preferred before voting on map C, as at least four council members said they might have being preferred card B as they were voting on a motion for first. She called on the board to annul their votes and then vote by paper ballot to be read aloud by staff to ensure that each member voted for the card they preferred, as the deadline for approving a card was still more than a month away on February 28. .

None of this happened and there was no discussion from council, so the district will move forward with Map C to redraw its political boundaries. This means that each district will continue to be represented by a single director and no director area will be without representation until the next election cycle. Gamoian (Zone 1), Guerrero (Zone 2), Naylor (Zone 3) and Administrator Catalina Blair (Zone 4) will be elected under the new zone boundaries in November. Administrators Soleno (zone 5), Villagas (zone 6) and Jacqui Gaebe (zone 7) will not be elected in the new zones until 2024.

Map C can be viewed on the district website by clicking on “VUSD Trusteeship Redistricting Process and Timeline” on the vusd.org homepage.

The main reasons why you can benefit from debt consolidation

Maps: Rain, sleet, snow en route as a winter storm warning has been issued for parts of Mass.